In the election, Wine, a popular young singer-turned-opposition lawmaker, and nine other challengers are challenging incumbent President Yoweri Museveni, an authoritarian who has wielded power since 1986 and is seeking a sixth term.

Wine, whose real name is Kyagulanyi Ssentamu, has seen many associates jailed or go into hiding as security forces crack down on opposition supporters they fear could mount a street uprising leading to regime change.

He insists he is running a nonviolent campaign.

The vote count will begin when polls close at 4 p.m. and results are expected within 48 hours.

More than 17 million people have registered to vote, and a candidate must win more than 50% to avoid a runoff.

Internet access was cut Wednesday night. “No matter what they do, the world is watching,” Wine tweeted. 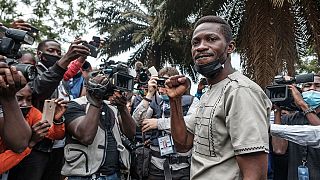