Uganda's President Yoweri Museveni took an early lead in the presidential election, according to preliminary results released on Friday by the electoral commission, but his main rival Bobi Wine said he had proof of election fraud.

Just over 29% of votes from Thursday's ballot have been counted and Museveni is in the lead with just over 61.% of the total votes counted.

While the pop-star turned politician known as Bobi Wine has just over 27.%.

Wine claimed victory in a news conference on Friday and said he had filmed proof of fraud during the vote, calling the early results a "joke".

"I am very confident that we defeated the dictator by far," he said.

"I call upon all Ugandans to reject the blackmail. We have certainly won this election and we've won it by far."

The 38-year-old has been the main rival to Uganda's long-term leader who has been in power since 1986 and is seeking a sixth term in office.

The elections have been marred by violence and repression, with campaigning banned due to coronavirus measures, arrests of opposition candidates and deadly protests.

Wine said the election was marred by "illegal, high handed actions which Museveni and his regime of blood have undertaken to set (the) stage for the worst rigging this country has even witnessed."

Museveni has yet to comment on the early results.

The Electoral Commission hailed the vote for being calm and peaceful

Wine said once the internet was restored he would detail the irregularities. 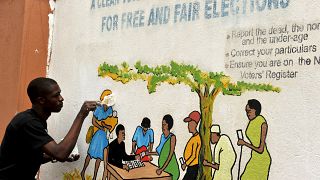 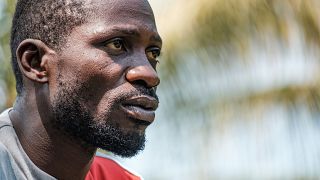 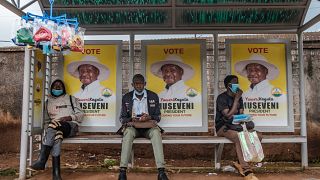