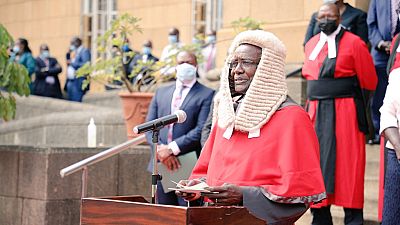 David Maraga’s tenure as Kenya’s Chief Justice came to an end on Monday. He turns 70 on January 12.

Maraga has been at the helm of the east African nation’s judiciary for four years.

He replaced Dr Willy Mutunga who resigned in June 2016.

Special proceedings were held at the Supreme Court in Nairobi in Maraga’s honour.

He later handed over the instruments of power which included an original copy of the constitution and the institutional flag to the acting Chief Justice Philomena Mwilu.

At the ceremony, he was disrobed to symbolise the end of his tenure.

Mwilu is battling corruption charges. She was arrested in August 2018 by officials from Kenya’s anti-corruption agency in a fashion seen by the legal fraternity in the country as disrespectful.

Her supporters have said that the charges are a political fabrication meant to punish her for supporting the nullification of the 2017 presidential election.

Friction with the Executive

Maraga’s tenure was marked by the nullification of the 2017 Kenyan presidential election.

It was the first presidential election to be annulled in Kenya’s history and in Africa.

In its ruling, the Supreme Court agreed with the petitioner – veteran opposition activist Rail Odinga – that the election had been manipulated in favor of President Uhuru Kenyatta.

"A declaration is hereby issued that the presidential election held on Aug. 8 was not conducted in accordance to the constitution and applicable law, rendering the results invalid, null and void," Maraga’s ruling read in part.

The verdict set him on a rocky road with Kenyatta, whose victory he quashed.

The President criticized the judiciary as full of ‘hypocrites’ and accused Maraga of ‘subverting the will of Kenyans’.

In 2019, Maraga blasted the government for ‘mistreating and disrespecting’ the judiciary after the Executive ordered cuts to the judiciary’s budget.

Today is my last day in office. I thank the Almighty God for fighting my battles and guiding me to this moment. Thank you Kenyans for the opportunity to serve. God bless Kenya. pic.twitter.com/M7EvxQorbz

He was Kenya’s second Chief Justice under the country’s new constitution.

Maraga leaves office after having served the Judiciary for 18 years.