Chaos at a Stadium in Galkayon City

Several people were left dead and wounded Friday in a suicide bombing at the entrance of a crowded stadium in the southern part of Galkayon city Somalia, where Prime Minister Rooble Mohammed Hussein had been expected.

According to a local resident, Mumin Adan, "The city is in mourning and many bodies are buried in the main cemetery. I saw more than ten people brought there to be buried."

The extremist Islamist group al-Shabaab, linked to al-Qaeda, has claimed the attack targeting the prime minister — who had not yet arrived at the time of the explosion and citing the now -deceased commanders of two local military units.

The centrally located city of Galkayo at about 600 km north of Mogadishu, has been the scene for deadly violence in recent years between troops from the two semi-autonomous states of Somalia — Galmudug to its south and Puntland to its north> As well as and between their respective rival clans

Al-Shabaab controlled the Somali capital before being ousted in 2011 by African Union (AU) troops supporting the fragile Somali government. They still control vast rural areas from where they conduct their operations.

Somalia has plunged into chaos since the fall of President Siad Barre's military regime in 1991, followed by a war of clan leaders and the rise of al-Shabaab. 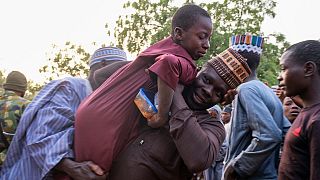