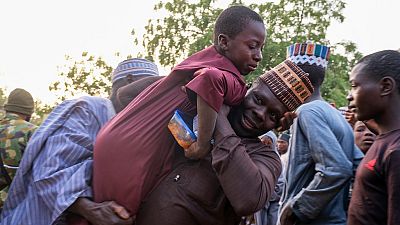 Nigerian Parents in Katsina Reunited with Their Sons

Exhausted and dishevelled, several hundred Nigerian schoolboys were reunited with their parents on Friday — experiencing their first full day of freedom after being seized nearly a week ago in a mass abduction claimed by Boko Haram.

Illya Kabir, the father of a rescued student is overjoyed, "I feel very happy to find my son in this episode that has happened. I am grateful to Almighty Allah that secured him out of everything."

Hajia Rukayat, the mother of a rescued student, is relieved and grateful, "We thank the governor, Aminu Bello Masari, may God bless him and the military as well as all the others that made it possible for the rescue of our boys."

The boys, worn out from the traumatic experience, were brought to the governor's office in the capital city of Katsina state in northwestern Nigeria, after being released late Thursday — where they were also personally received by President Muhammadu Buhari.

The Nigerian president said with an air of tenderness to the children, "I came here to see you and to rejoice with you all as God has saved us all from this calamity."

A moment of joy at the boys' return sis mixed with concern for the ones still captive as both their numbers and the circumstances of their release remain unclear to local authorities.

United Nations chief Antonio Guterres has called "for the immediate and unconditional release of those who remain abducted" while commending the rescue of "some of them."

He urged Nigeria to make "increased efforts to safeguard schools and educational facilities in the country."

Experts have warned that jihadists - operating in the northeast of the country, hundreds of kilometres from where Friday's attack occurred, were attempting to forge an alliance with criminal gangs in the northwest.

In addition, there have been speculations that the school raid was carried out by a well-known criminal in the region, Awwalun Daudawa, in collaboration with Idi Minorti and Dankarami, two other crime chiefs with strong local followings, acting on behalf of Boko Haram.

Around 8,000 people have lost their lives to terrorism in the northwest since 2011, according to the International Crisis Group (ICG). 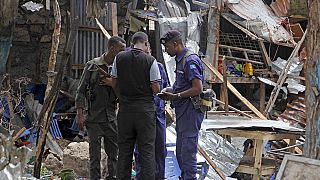