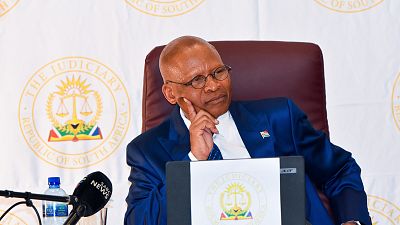 South Africa's chief justice on Friday vehemently defended a prayer he made against "satanic" Covid-19 vaccines, seeming to refer to a conspiracy theory that they could "infuse 666" into people's DNA.

Mogoeng Mogoeng, a devout Christian, came under strong criticism on social media following the prayer at an event in Johannesburg on Thursday to honour people who died from Covid-19 in Africa's hardest-hit country.

On Friday he told a media conference that he would not be dissuaded from speaking against or praying against possible "satanic" vaccines.

"You can't say we must, as Christians, just fold our arms and say 'whatever people come with' is fine. No. We can't," he said.

"If there is a vaccine with 666, I want God to destroy it. If there is any vaccine meant to corrupt the DNA of people, I'm asking God to interrupt it. Any clean vaccine, they must produce it quickly," he said.

On Wednesday South Africa declared that it had entered a second wave of the pandemic as the number of new infections surged, with nearly 837,000 cumulative cases and more than 22,700 deaths.

The government has warned against spreading misinformation about the coronavirus, as it waits to secure its first vaccine doses through the COVAX global distribution scheme.

But Mogoeng said he was unfazed by any backlash and that nothing stopped him from commenting on any issues because of his judicial responsibilities.

"This is a free country. I'm not going to be silenced. I don't care about the consequences," he said.

In June this year the judge sparked an outcry for remarks seen as pledging support for Israel.

"I cannot, as a Christian, do anything other than love and pray for Israel," he said then.