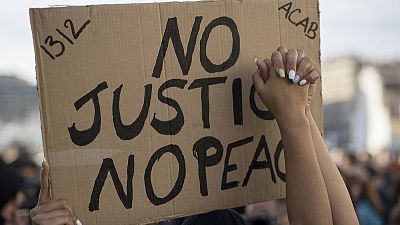 On Monday in Namibia, the regional governor of the Khomas Region, Laura Veendapi McLeod-Katjirua publicly addressed the ongoing issue of gender-based violence in the country which has been steadily garnering international media attention in light of protests staged by many young Namibian women.

Namibian police and the Special Reserve Force fired rubber bullets, teargas and used batons to subdue an unprecedented three-day nationwide protest in early October by around 400 mostly young impassioned women chanting slogans such as "no justice, no peace.” on the streets of the nation’s capital city, Windhoek.

While speaking at the 16 Days of Activism campaign against gender-based violence on Monday launched by the Ministry of Gender Equality, Poverty Eradication and Social Welfare, the governor stated that the rate of femicide is disconcerting and urgently requires serious action — as around 70% of women in the nation suffer some form of violence from their intimate partners.

In her words, "As we launch the 16 days, we hope they will create the needed awareness of the violence women, girls and boys undergo.

The 16 Days of Activism campaign — which is themed 'Namibia Unite to Collectively Prevent and Respond to GBV!', is aimed at creating and deepening awareness of gender-based violence in Namibia in the hopes of amplifying efforts to combat this unfortunate phenomenon throughout the year.

Perhaps one could argue that the efforts are indeed necessary as Windhoek alone receives more than 200 cases reported under the Domestic Violence Act on a monthly basis.

The covid-19 pandemic lockdown, contrary to many other parts of the world like France and the United States, saw fewer cases per month recorded in the city with 175 reported monthly, according to the Namibian police.

Background
The countrywide protests seen in autumn by Namibia's young women initially kicked off on social media before eventually taking to the streets as the ladies and their non-female allies marched to government offices to demand the resignation of Doreen Sioka, the Minister of Gender Equality and Child Welfare due to her perceived-problematic religious stance when handling matters pertaining to gender-based violence.

In addition to wanting armed response units and special training for police officers in the handling of cases pertaining to gender-based violence, the young social activists are calling on President Hage Geingob to declare a state of emergency over violence against women and female homicide.