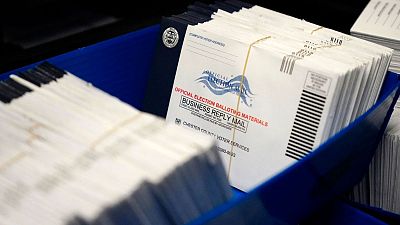 The US presidential election - more than any other before it - has established a battleground online.

The role of social media companies in monitoring content has drawn controversy from both Republicans and Democrats, especially given the alleged foreign interference in the 2016 election.

But data from global tech companies, such as Google or Facebook, has also provided a unique perspective on what subjects are most interesting to US citizens, and how candidates have invested in their online campaigns.

What have voters been searching for on Google?

In the United States, there was a 362% increase in users searching for the term "postal voting" compared to other election years, according to Google Trends.

Meanwhile, there was a 366% increase in searches for "electoral fraud" and the phrase "fact check" had peaked in search interest long before November.

The US President Donald Trump has repeatedly questioned mail-in ballots, tweeting in May they would lead to a "fraudulent" election.

In a first, Twitter labelled the tweet and directed social media users to fact checks and news stories about Trump's unsubstantiated claims.

The tech giant said the tweets "contain potentially misleading information about voting processes and have been labelled to provide additional context around mail-in ballots".

Google Trends also showed that users have searched for "how to vote" and "early voting" more now than any other time on record.

Meanwhile, other political search terms with especially high interest in the US in 2020 included "unemployment", "vaccine" and "racism".

The US economy and growth experienced a historic drop in the second quarter of the year during the COVID-19 pandemic, while demonstrations against social injustice have raged across the country following the death of George Floyd on May 25.

Who spent the most on online ads?

Discussion about the availability of political ads presented a different headache for tech companies in the lead up to the election.

However, CEO Mark Zuckerberg confirmed the social network would ban new political adverts in the week before November 3.

Rob Leathern, director of product management at Facebook, added the company would also ban adverts that tried to delegitimise the outcome of the election, such as calling a method of voting fraudulent or corrupt.

But aside from these exceptions, both Trump and Joe Biden have heavily invested in Facebook advertising, more than doubling ad spending on the social network compared with the presidential candidates in the 2016 race.

In the last week of October, the difference was even more dramatic, with the Democrat candidate more than doubling the investment of Trump.

Google decided to limit the reach of political adverts on the search engine in November 2019, preventing campaigns from targeting ads based on users' internet search preferences and viewing history on YouTube.

Where were these ads targeted?

In the last month, both parties have heavily invested their campaign funds into online ads for specific US states, many of which are seen as crucial swing states.

Trump and Biden have each spent more than $1.50 million (€1.28 million) on Facebook ads in Pennsylvania, Michigan, North Carolina, and Arizona since October 1.

Unsurprisingly the most lucrative US state is Florida, where many critics are hinging the election result on, with just a few points predicted to separate the two candidates.

In the last month, political ads on Facebook in Florida have cost Biden $6.0 million (€5.1 million) and Trump $4.8 million (€4.1 million) respectively.

Euronews has found that many of these adverts are also individually focused on political issues that had been searched for on Google.

Trump's most interacted advert on Facebook - 15% of which was released in Florida - issued a clear message to encourage unity during the COVID-19 pandemic.

The ad featured the US president speaking after he had left Walter Reed Hospital following his own treatment for COVID-19.

Meanwhile, Biden's campaign has run ads with pledges to tackle social injustice and unemployment, alongside a straightforward message that the Democrats "have to get this guy out of [the White House".

While these figures provide only an indication of the campaigns, experts agreed that Trump outperformed Democrat nominee Hillary Clinton online in 2016, and the online campaign has been a central focus for both parties in the race for the White House.