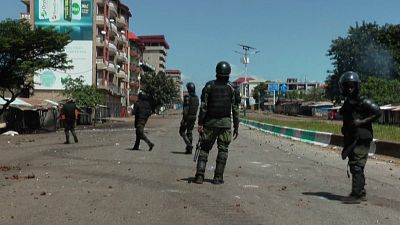 Violence rocked Guinea's capital Conakry on Friday as supporters of opposition leader Cellou Diallo clashed with security forces who tried to disperse them.

They threw stones and blocked roads. Police responded with teargas and bullets. The clashes erupted as soon as provisional results released by the electoral commission showed president Alpha Conde winning with a big margin.

Conde, 82, won twice as many votes as his nearest rival, opposition candidate Cellou Dalein Diallo, with 37 of 38 districts counted, according to preliminary results from the commission.

"He is an illegal and illegitimate candidate who is stubbornly pursuing his obsession to turn Guin ea into a monarchy in which, by the way, he will dictate orders to his subjects," said Kounduno.

Diallo maintains that he won with a landslide despite irregularities, according to his own tally. He remains barricaded in his home which security forces have besieged since Monday.

The International Criminal Court’s chief prosecutor warned on Friday that warring factions in Guinea could be prosecuted after fighting erupted.

“I wish to repeat this important reminder: anyone who commits, orders, incites, encourages and contributes in any other way to crimes … is liable to prosecution either by the Guinean courts or the ICC,” she said.

#ICC Prosecutor #FatouBensouda: "I wish to repeat this important reminder: anyone who commits, orders, incites, encourages or contributes, in any other way, to the commission of #RomeStatute crimes, is liable to prosecution either by #Guinean courts or by the #ICC."

Many people have been killed since clashes began on Monday. Scores too had been killed in the run up to the vote as protestors marched against Conde's bid for a third term.