Nigerian President Muhammadu Buhari Thursday night in a national TV address spoke about the unrest that has gripped his country in recent days.

Buhari in his speech however and notably did not mention the shootings of peaceful protesters on Tuesday nght October 20 in Lagos, the commercial nerve centre of the west african state, that prompted international outrage.

"I am indeed deeply pained that innocent lives have been lost. These tragedies are uncalled for and unnecessary. Sadly there's no way whatsoever to connect these bad acts to legitimate expression of grievance of the youth of our country."- the 78 year old Buhari said.

There were quick reactions online from many Nigerians on the speech some have described as depressing and threatening.

Men in military uniform in widely circulated video on social media were seen opening fire without warning on thousands of peaceful protesters singing the national anthem Tuesday night in Lekki Lagos, killing at least 12 people, according to Amnesty International.

The shootings have been widely condemned but Buhari did not speak of them at all during his Thursday address. He instead urged calm.

His reference can be attributed to the reactions from prominent persons around the world including a former US secretary of state Hillary Clinton, and the United Nations Secretary-General, António Guterres calling on the Nigerian government to address the demands of the young citizens asking for a better country.

"To our neighbours in particular, and members of the international community, many of whom have expressed concern about the ongoing development in Nigeria, we thank you and urge you all to seek to know all the facts available before taking a position or rushing to judgment and making hasty pronouncements"- Buhari said.

Many Nigerians had hoped to hear from their leader prior to the address but there are now grumblings that Mr Buhari's speech lacked empathy and instead warned that his government will no longer tolerate the breakdown of order in the country. 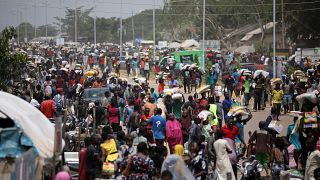