Burned vehicules laying on the side of the road, remains of friday's attack.

Jihadis fighters linked to the Islamisc State in West Africa Province ISWAP group killing 18 members of the convoy in an ambush on Friday, according to Major General Eneche .

Insurgents opened fire with machine guns and rocket-propelled grenades, in an attempt to harm Governor Babagana Zulum of Borno State.

The governor was unharmed, an was extracted to a nearby garrison, before heading back under tight security.

Zulum was on an assessment tour near the town of Baga on the shores of Lake Chad, a region of Nigeria, known for being the bastion of terrorists for the last decade.

Despite the insurgency still going strong, Zulum has insisted on Internally Displaced People returning to their villages from which they fled because of firefights.

Last week Zulum said feeding the displaced was not financially sustainable, insisting the only option was for them to return and rebuild their homes and live a "dignified" life, despite concern from aid agencies of the security risks to which the returnees would be exposed.

Most of the displaced have been housed into squalid camps where they depend on food handouts from international charities.

A return that seems impossible, for over 2 million people.

The decade-long insurgency in northeast Nigeria has killed 36,000 people and forced over 2 million from their homes. 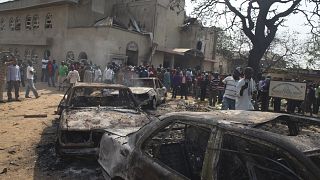