Scientists based in Kenya are trying to ensure the survival of the white rhinoceros subspecies via in vitro fertilisation.

But using his sperm and the eggs of the two surviving female white rhinos, they have created white rhino embyros. Neither female can carry a pregnancy, so the scientists are hoping to use a 17-year-old southern white rhino named Karen as a surrogate mother.

Dr. Thomas Hildebrandt, from the Leibniz Institute for Zoo and Wildlife Research says it's a complicated project :

"We have created so far three embryos, transferable embryos from the northern white rhino, but before we do the full procedure, to transfer into a surrogate mother, we have to know that the system is working."

Sudan, the last white male rhino to die, was born in 1973 and lived until the equivalent of 90 human years.

The two female white rhinos that survive him are actually his daughter and granddaughter.

All different subspecies of rhino have suffered reductions in numbers because of poachers who kill them for their horns, to supply illegal markets in parts of Asia. 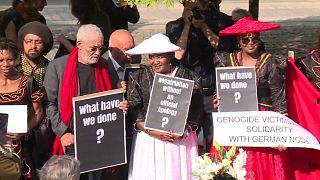