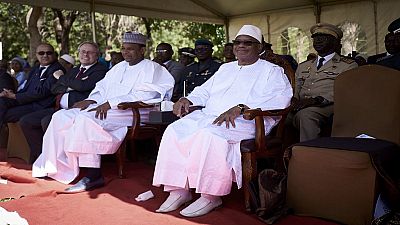 West African leaders on Monday called for the swift creation of a unity government in Mali and a fresh vote after disputed elections, but warned of sanctions against those opposing efforts to end the country’s crisis.

In a statement issued after a video conference, heads of the 15-nation regional bloc ECOWAS stood by President Ibrahim Boubacar Keita but called for a unity government to be “established rapidly” and urged the opposition to join it.

Ministers in charge of defence, justice, foreign affairs, national security and finance would be nominated before the unity government is created, it said.

But — addressing demands by protestors that Keita quit — leaders also said the country’s democratic constitution had to be respected.

They asked an ECOWAS commission “to consider sanctions against all those who act contrary to the normalization process of the crisis.”

The virtual summit, which lasted three hours, was convened amid fears among Mali’s neighbours that the deepening crisis could cause the fragile state to slide into chaos.

Keita, in power since 2013, is battling major problems on several fronts, including an eight-year-old jihadist revolt and a slumping economy.

However, much of Mali’s current tension was sparked in April, when the Constitutional Court tossed out 31 results from long-delayed parliamentary elections, benefiting Keita’s party and sparking protests.

Tensions then ratcheted up into a crisis on July 10 when an anti-Keita rally organised by the June 5 Movement, a loose coalition of opposition groups and religious leaders, turned bloody.

Turning to this issue, the summit called for the immediate resignation of the contested 31 MPs and the holding of by-elections in their constituencies.

In the meantime, parliament could continue to operate with the 116 other MPs.

The summit also called for an overhaul of the Constitutional Court, and for Keita to use his constitutional powers to nominate the nine members if this failed to make headway.

Mali is a member of ECOWAS, which has intervened in several crises in West Africa, notably in The Gambia, Liberia and Sierra Leone.

The conclusions from Monday’s summit reiterate a blueprint for compromise that ECOWAS drew up on July 19, but was rejected by the June 5 movement.