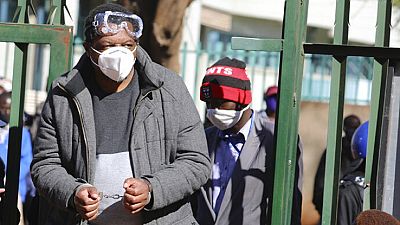 A Zimbabwean journalist known for exposing alleged government corruption appeared in court on Wednesday and is reappearing today alongside an opposition politician with whom he is accused of conspiring to mobilize anti-government protests planned for July 31.

Hopewell Chin’ono and Jacob Ngarivhume are charged with “incitement to participate in a gathering with intent to promote public violence, breaches of peace or bigotry.”

They spent a second night in detention after their applications for bail were rolled over to today due to lockdown measures that force businesses and the courts to close earlier than normal.

We are at court for the continuation of Hopewell’s bail hearing. It was meant to start at 8:30. The prison van has only just arrived.

Last night the prison refused to allow Hopewell and Jacob to wear PPE or for us to do our own sanitization of the cell. #FreeHopewell #FreeJacob

“I am in good spirits, I have done nothing wrong,” Chin’ono told journalists while entering court. “I am being persecuted for putting out the corruption stories, so I am not worried.”

Police returned to his home on Tuesday “to recover a camera which they alleged was used by the journalist to take photos and screenshots which he allegedly posted on Twitter,” said Zimbabwe Lawyers for Human Rights, which is representing him.

It’s the latest in a string of arrests of journalists, lawyers, nurses, doctors, teachers and political activists in the southern African country, where political tensions have been rising for months as the economy collapses amid increasing allegations of human rights abuses.

The police and government officials have defended the arrests, saying no one is above the law.

Chin’ono endorsed the planned protests and “incited” people to rise against the government with tweets such as “Zimbabwe will never be free from looters through elections it is just a waste of time,” police allege.

In June, Chin’ono said he feared for his life after ruling ZANU-PF party spokesman Patrick Chinamasa accused the journalist of seeking to embarrass Mnangagwa by linking the president’s family to alleged corrupt COVID-19 related contracts.

The arrest of Chin’ono, a Harvard University Nieman Fellow, has drawn sharp criticism in Zimbabwe and abroad. Foster Dongozi, the Zimbabwe Union of Journalists secretary-general, said he is being “victimized for exposing corruption in government.”

Police in Zimbabwe have confirmed the arrest of the two men – Chin’ono and Ngarivhume stating that the action was “in connection with allegations of contravening Section 187 (1) (a) as read with Section 37 (1) (a) of the Criminal Law (Codification & Reform) Act, Chapter 9:23, “incitement to participate in public violence.”

“The duo will appear in court soon and are currently in police custody,” a statement signed by an Assistant Police Commissioner read. It was however dated 21 July 2020 instead of 20th. The statement was shared by Ministry of Information and Publicity on Twitter.

It is now clear that the call for protests on July 31 is the reason for the arrest. Zimbabwe has routinely deployed heavy police presence to scuttle planned protests.

The PoliceZimbabwe confirms the arrest of jngarivhume and daddyhope in connection with allegations of contravening Section 187 (1) (a) as read with Section 37 (1) (a) of the Criminal Law (Codification & Reform) Act, Chapter 9:23, "incitement to participate in public violence. pic.twitter.com/SpOJwvOv7y

A Zimbabwean journalist, Hopewell Chin’ono; has been forcibly arrested by state agents on Monday at his house in the capital Harare.

Local media outlets quoted his lawyer Beatrice Mtetwa as confirming the early morning raid that led to his arrest. The agents reportedly shattered a glass door before picking him up.

He had in the morning tweeted that security agents were harassing his workers. “They are breaking into my home. Alert the world!” his last tweet as at midday July 20 read.

Hopewell is a strong voice in the area of calling out government corruption and excesses. The police has yet to confirm whether they had arrested him and on what charges specifically.

The arrest has triggered a torrent of social media demands from the diplomatic community, human and press rights groups and Zimbabweans asking for his release.

“Allowing journalists to do their work is vital in the fight against corruption. The arrest of Hopewell today is part of a worrying trend against free speech in Zimbabwe,” the Dutch Embassy posted on Twitter.

The US embassy said it was “deeply concerned” for the welfare of the journalist adding that the work of investigative journalists remained pivotal in the fight against corruption. “Political intimidation of the press has no place in democracies,” they added.

Meanwhile, a lawyers group MISA Zimbabwe confirmed that Chin’ono and an activist Jacob Ngarivhume were at the Harare Central police station adding that no charges had been leveled against them.

The activist who is also leader of Transform Zimbabwe movement had recently announced poor governance protests slated for July 31.

Mhike says it seems Jacob Ngarivhume has also been arrested and is also at Harare Central Police station.

Just heard that journalist Hopewell Chin’ono daddyhope has been abducted from his home. This barbaric and unacceptable. He must be released immediately #FreeHopewell https://t.co/AEKdccXqO5