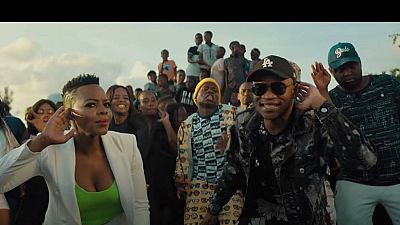 A song that has transcended its national boundaries, the continent and has people across the world dancing to its vibrant rhythm. So vibrant it has inspired a dance challenge that has taken social media by storm.

The song is Jerusalema – made in South Africa by producer, DJ and artist Master KG featuring Nomcebo. Reports indicate that the track released in late 2019 became an instant hit in South Africa but it is now it has all but gone global.

From hospital hallways in France and Sweden, to roof tops, public places in Italy, Romania, the UK and Canada, the beaches of Cape Verde, in a Jamaican compound, somewhere in Tanzania; on Facebook, Twitter and TikTok, the #JerusalemaDanceChallenge has hundreds posting videos of themselves or others dancing to the song.

Many more people around the world sharing the videos. “The World Is Dancing #JerusalemaDanceChallenge. When we created this song I never thought it will do this!!!GOD is amazing,” MasterKG tweeted on Saturday.

The artiste has also done a remixed version with Nigerian musician Burna Boy. A Spanish artist, Matias Javier, from Santiago, Chile, has recorded a cover version of the track.

Local media outlets report that a clip in France of people doing the ‘Jerusalema dance’ last month was among the first footages of the dance when it went viral. An Italian restaurant in Romania, Daily Timișoara, last week posted a video of patrons dancing to the song in front of their premises.

The artiste reported on June 28 that the track had grossed 30 million views on YouTube. As at the time of filing this report (July 19), it had reached over 43.4 million views. The remix track uploaded a month ago has reached 2.2 million page views.

Master KG dropped the fire track Jerusalema just last year and it has been a grooving staple ever since. The people absolutely love this track – it has put Master KG on the map for sure, the local Briefly news portal said.