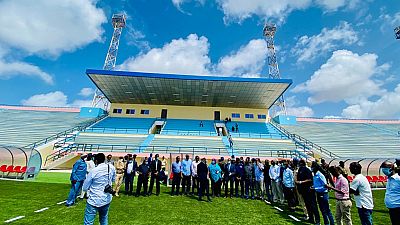 Somalia’s national stadium in the capital Mogadishu officially reopened today years after it was abandoned due to insecurity. A game was also honoured today after extensive renovations since 2018 when government took control of the facility.

It was adversely affected by the country’s civil war, at a point it was occupied by Al-Shabaab insurgents and later by the African Union’s AMISOM forces deployed to combat the group.

The European Union, Norway and other development partners supported the reconstruction efforts which began after the facility was officially handed over to the government by AMISOM in 2018.

President Mohamed Abdullahi Farmaajo was accompanied by top government officials for the reopening ceremony as they watched the game, the first in three decades at the venue according to some reports.

Somalia for years now honoured international games in Djibouti because of insecurity in the capital. The stadium was captured from Al Shabaab during an operation to liberate the city in September 2011. AMISOM subsequently used it as a base till the handover.

According to a company contracted to work on grassing the pitch, its constructions works started on the in late January 2020 and were completed on the 10th of April 2020. Domo Sports Grass added that reopening had been hampered by COVID-19 pandemic.

It is the latest national facility to be reopened in Mogadishu. over the weekend, the president also oversaw the reopening of the National Theater, which had also faced a similar fate due to insecurity.

“I have been dreaming of coming here all my life.”

Many young Somalis have never seen the #Mogadishu Sports Stadium. Saciid Yasir Hassan is one of them.

Today he visited the newly rebuilt stadium. The European Union in #Somalia is thrilled to have contributed to this moment. pic.twitter.com/GAWfdlx1Oc

#Football is a beloved sport in #Somalia. Many amazing matches took place at this stadium before the civil war. The grand reopening of the #Mogadishu Stadium is a great sign that country is on the right path. EU_in_Somalia is proud to support the reconstruction this stadium.⚽️ pic.twitter.com/cB6g00aCBe