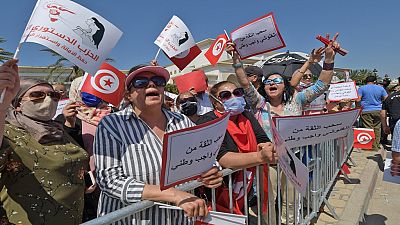 <p>Hundreds of unemployed Tunisians from around the country attempted to march onto parliament on Wednesday to demand a law guaranteeing them jobs.</p> <p>Skirmishes occurred between the protests and police forces who blocked their path.</p> <p>Demonstrators gathered at Bardo Square outside parliament and chanted: “Unemployed people, rise up, work is a right guaranteed by the Constitution”.</p> <p>Tunisia’s prime minister announced on Sunday a freeze in public service hiring, citing the difficult economic situation aggravated by the virus pandemic and lockdowns. </p> <p>Demonstrators demanded the adoption of a law that would guarantee jobs for anyone with a diploma who has been unemployed for more than 10 years.</p> <p>Such chronic unemployment is widespread in Tunisia.</p> <p>A study carried out jointly by the Tunisian government and the U.N. Development Program forecasts the unemployment rate in Tunisia to increase to 21.6% by the end of this year from 15% currently.</p> <p>Virus confinement measures are worsening joblessness and poverty in Tunisia, where the economy had already been struggling for years.</p> <p>Unemployment was a key driver of protests that overthrew Tunisia’s autocratic president and unleashed the Arab Spring uprisings in 2011.</p>