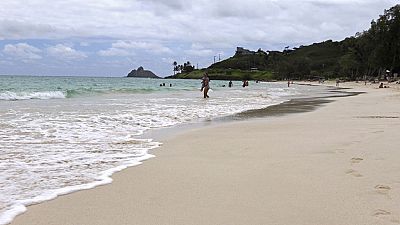 Mauritius has been cited as an example in the fight against the COVID-19. The country has announced that effective June 15, virus lockdown will be completely lifted, Africanews correspondent Yasine Mohabuth reports.

The famous white sandy beaches and the blue lagoons are once again accessible to the public, but the borders remain closed.

The country as of today has recorded 337 cases and 10 deaths. 325 of the cases have recovered with only two active cases. The Indian Ocean Island adopted very strict virus control measures since March 20.

Mauritians could only leave their homes if they had an emergency. Going shopping was organized alphabetically by surname.

To go to work, you needed a work access permit delivered by the police. These measures, which were criticized at the outset, gave the expected results. The locals are now delighted.

“As a citizen, I think that certain measures taken by the government were fairly strict in terms of security. For example, steps have been taken to close the borders. The police were strict on the road with regular roadblocks. As a result, it has helped stem the spread of the virus,” a resident Stephan Baichoo told Africanews.

“I find that Mauritius managed the COVID-19 crisis well. At the very beginning people did not understand what confinement was. But thanks to the drastic security measures taken by the authorities, we quickly caught up.

“Since then hygiene has become the number one priority. I find this an excellent asset for the tourism industry in Mauritius,” Soukaina Jamal Eddine, another resident stressed.

Tourism is a pillar of the economy. A sector adversely affected by the pandemic, no tourists have entered the country in recent months because of closed borders. Some hotels have been used as quarantine centers.

As for the borders, no date has been set for the opening. The beaches, fairs, gyms, casinos, discos and public gardens will once again be accessible. However, horse racing will always be held behind closed doors. Despite this deconfinement, wearing a face mask will be compulsory in public.

Mauritius’ lockdown will be lifted midnight Saturday, May 30 per Prime Minister Pravind Jugnauth’s announcement on Friday. The lifting of the health curfew means most activities could resume under certain restrictions from Sunday, May 31.

In his message to the Nation on Friday evening, he disclosed an end to the alphabetical outing system employed during the lockdown; subsequently people within the territory could go out also without Work Access Permit.

Supermarkets and shops will be allowed to operate normally. The shopping malls, restaurants, cafes and markets can also operate under sanitary conditions.

Places of worship may also reopen. However, beaches, nightclubs and cinemas will remain closed along with the borders. The country has been in lockdown since March 20.

A measure taken to contain the new coronavirus. Mauritius recorded 335 positive cases including ten deaths. Currently, there are three imported cases in the country.

May 12: Mauritius virus-free after total recoveries

Mauritius declared total recoveries from coronavirus infections as of May 11, 2020. The island nation’s official COVID-19 page said 322 people had recovered out of the 332 confirmed cases so far. 10 people have since died.

May 11 marked the fifteenth consecutive day that the no new case was recorded in the country. A lockdown however remains in place to contain possible spread of the virus.

Mauritius becomes the second Africa country to have declared virus-free status after infection. Mauritania weeks ago reported full recoveries (6 recoveries and a death at the time), another infection was subsequently recorded.

As of May 12, 2020 Africa’s sole virus free nation is Mauritius. Lesotho is the sole African country yet to record a case. Eritrea, Seychelles and Mauritania each have one active case pending according to tallies by John Hopkins University. 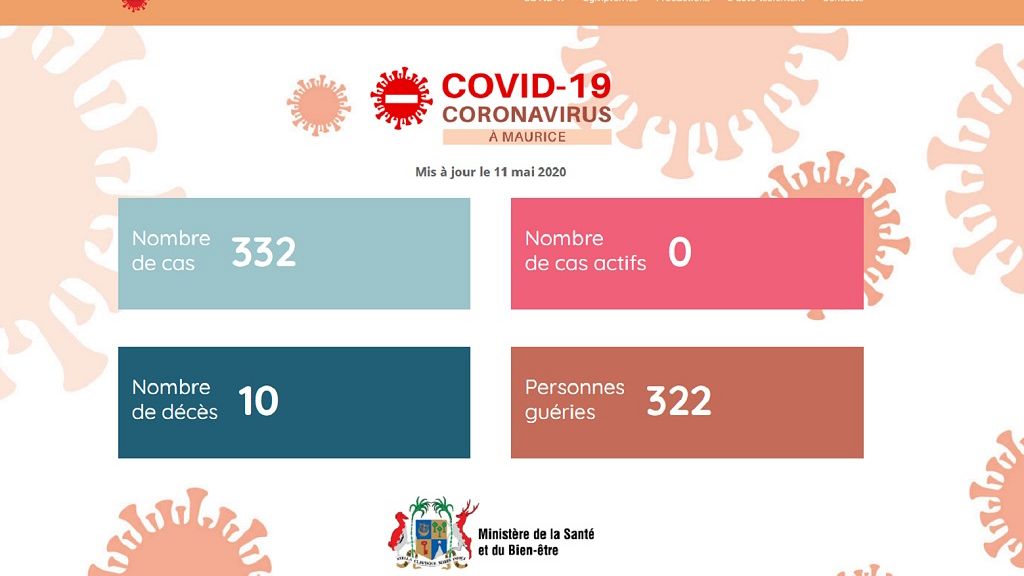 May 4: No new case in 8 days amid lockdown extension

Mauritius recorded no new COVID-19 cases for the past eight days, according to statistics provided by the National Communication Committee on Monday 4 May.

Currently there are 3 active cases out of 332 positive cases registered including 10 deaths. The sanitary curfew put in place on March 20, and which should have ended today, has been extended until June 1, Prime Minister Pravind Jugnauth announced last Friday.

“The population will need a little more patience, to avoid the risk of a second wave of the Covid-19 epidemic,” Jugnauth said.

However as from May 15 there will be a gradual resumption of certain activities, which will be added to essential sectors such as banks and supermarkets which are still operating despite the containment.

Even though religious, political and union gatherings will still be banned; bakeries, barbers, butchers and fishmongers will be able to open again on May 15. Markets, bars and shopping centers will remain closed until June 1, while schools will resume on August 1.

Beaches are also prohibited on the Indian Ocean island, a tourist hot spot, while a maximum of 10 people can attend weddings and funerals.

Leader of the opposition and member of the Labour Party, Arvin Boolell, expected the Prime Minister to present a full roadmap. His main concern remains public transport where he wonders about the protocols to follow.

Former Prime Minister and MMM leader Paul Bérenger also drew attention to the economic weight of the extension. He said the government’s decision to extend the health curfew until June 1 was unwise.

“It is a very heavy price to pay for the economy and the freedom of the citizens,” Paul Bérenger said.

You can follow major African developments via out LIVE blog below