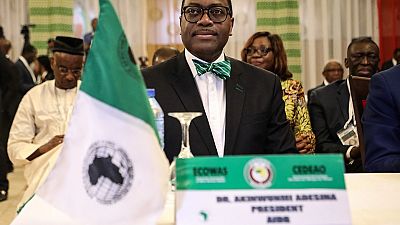 <p><strong>The African Development Bank (AfDB) announced Thursday evening, the launch of an independent investigation into allegations of prevarication against its president, Nigerian Akinwumi Adesina, the only candidate for re-election to a new term.</strong></p> <p>The Abidjan-based pan-African development institution finally gave in to the demands of the United States, which was dissatisfied with the internal investigation that had totally exonerated Adesina from serious accusations made by a group of “whistleblowers” such as “unethical behaviour, personal enrichment and favouritism”.</p> <p>“The Board (of Governors of the AfDB) agreed to authorize an independent review of the “whistleblowers’ “allegations” against Mr. Adesina, according to a statement the Board’s bureau chairperson, Nialé Kaba, made at the end of a new meeting of the Board’s bureau on Thursday.</p> <p>This “independent review should be carried out by a neutral, honest, high-calibre person with unquestionable experience and a proven international reputation, within two to four weeks maximum, taking into account the electoral calendar” of the Bank, which is due to elect its president at the end of August, Mrs. Kaba said.</p> <p>Mr. Adesina, who was elected in 2015 to head the AfDB, one of the world’s five major multilateral development banks, has been the subject of a series of embarrassing accusations since the beginning of the year, which were disclosed in the press in April.</p> <p>In a detailed report, the “whistleblowers” accuse him of favouritism in many senior appointments, especially of Nigerian compatriots, of appointing or promoting people suspected or convicted of fraud or corruption, and of granting them comfortable severance packages without sanction.</p> <p>The charges were outrightly refuted by Mr. Adesina, 60, the first Nigerian to head the AfDB since its creation in 1964, who has repeatedly claimed his “innocence” and was quickly exonerated by the Bank on the basis of a report by its internal ethics committee.</p> <strong>“Mystification and Smoking”</strong> <p>But the United States, the AfDB’s second largest shareholder after Nigeria, demanded at the end of May that an independent investigation be launched, calling into question, in a scathing letter from US Treasury Secretary Steven Mnuchin, the work of the ethics committee, and provoking a serious crisis in the pan-African institution.</p> <p>“Considering the scope, seriousness and accuracy of the allegations against the Bank’s sole leadership candidate for the next five years, we believe that a more thorough investigation is necessary to ensure that the AfDB president enjoys the full support and confidence of shareholders,” Mr. Mnuchin wrote.</p> <p>The decision to launch an independent investigation was taken “with a view to reconciling the different points of view,” Mrs. Kaba said.</p> <p>While his re-election seemed assured six months ago, with the support of the African Union and the Economic Community of West African States, and following a giant capital increase of 115 billion dollars accepted in October 2019, Mr. Adesina’s position now appears increasingly fragile. </p> <p>The charismatic man with a flamboyant style is nevertheless fighting like a handsome devil, vilifying his opponents, extolling his record and seeking every possible support.</p> <p>Nigerian President Muhammadu Buhari publicly expressed his support for him on Tuesday after receiving him in Abuja. A development economist, Mr. Adesina was his country’s agriculture minister before becoming AfDB president.</p> <p>He also received the support of a dozen former African heads of state who signed a joint letter.</p> <p>On the other hand, the AfDB’s non-African shareholders seem to be more circumspect about its action, according to observers.</p> <p>The AfDB has 80 shareholder countries (54 African and 26 non-African countries, from Europe, America and Asia). It is the only African institution rated triple A by financial rating agencies. </p> <p>Internally, Mr. Adesina’s management of staff has caused turmoil over the past five years, leading to the departure of many managers.</p> <p>In an open letter dated May 30, a “group of AfDB African staff members” harshly criticized his management, accusing him of “mystification and smoke”, i.e. of communicating rather than acting, and of having “weakened” the Bank.</p> <p><span class="caps">AFP</span></p>