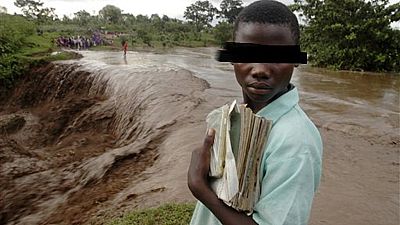 <p>Thousands of Ugandans have been displaced from their homes after heavy rains hit the East African country.</p> <p>Reports say the overflow of two rivers in western Uganda exacerbated the situation, causing buildings to submerge. A major hospital in western Kasese had partly been submerged according to the Red cross.</p> <p>Betty Mbambu, flood victim spoke to the media: “I had just bought a plot. The flood came and washed away my property, cupboards, mattresses. Right now, we are here trying to see what things of ours we can dig out. </p> <p>“We woke up and business and the property were destroyed. Right now we are trying to find the remaining properties (items) that could been buried in our house.”</p> <p>The rains also led to damage of infrastructure, including roads, bridges and several farms were washed away.</p> <p>In a related development in East Africa, floods have killed 65 people in Rwanda on Thursday and nearly 200 in Kenya last month.</p> <h2 style="font-size:16px;"> Kasese floods death toll now 11 – Relief Web </h2> <p>The district and Uganda Red Cross authorities said the deceased included two students, and Uganda People’s Defence Forces (<span class="caps">UPDF</span>) soldier, Lothorach Lokwang, attached to the Bwera-based Mountain Brigade.</p> <p>At least 11 people have been confirmed dead following the new wave of floods that hit the Uganda-DR Congo border district Kasese on Thursday.</p> <p>Nine of the deaths occurred in Kitholhu sub-county while the other two were killed in Mpondwe-Lhubiriha town council when floods washed them into River Lhubiriha, which burst its banks.</p> <p>Also River Thako in the Town Council flooded.</p> <p>The floods were as a result of River Lhubiriha, which borders Uganda and DR Congo along Kitholhu sub-county, in Bukonzo West Constituency. It burst its banks following the overnight torrential rains in Mt Rwenzori.</p> <p><a href="https://reliefweb.int/report/uganda/kasese-floods-death-toll-now-11"><span class="caps">READ</span> <span class="caps">MORE</span> – Deadly Kasese floods</a></p>