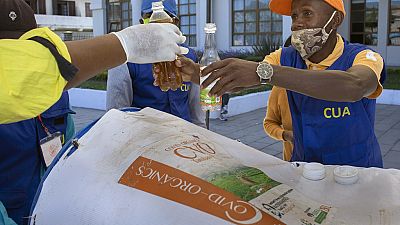 Covid-Organics, a herbal tea presented by Madagascar’s President Andry Rajoelina as a remedy against the deadly Covid-19 pandemic, is made from artemisia, a green fern with an appearance similar to cannabis.

Its proponents tout it as the first effective treatment against the coronavirus. Its detractors have dismissed it as an overly hyped magic potion, at best useless, at worst dangerous.

Artemisia annua has a long history in its native China, where scientists discovered an active ingredient that made the plant a front-line weapon in the fight against malaria.

However, the drink is being promoted in some African countries as a cure. Rajoelina is the promoter-in-chief of the mixture, marketed as Covid-Organics and administered in the form of a herbal infusion.

Asserting that the Madagascan brew has the potential to “change history,” Rajoelina has widely distributed it in his Indian Ocean island nation and donated supplies it to many parts of Africa.

The East African countries of Tanzania and the Comoros are among enthusiastic customers as well as Guinea-Bissau and Equatorial Guinea on the Atlantic coast.

Guinea-Bissau President Umaro Sissoco Embalo made a point of personally taking delivery of his country’s Covid-Organics order at the airport.