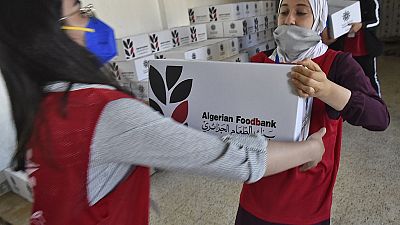 Algerian authorities have made the wearing of masks compulsory as part of new measures to contain Covid-19, in the run-up to the Muslim Eid al-Fitr holiday.

A statement from the Presidency published on Monday evening, after a meeting of the Scientific Committee to monitor the evolution of the pandemic, stated that the “wearing the mask is just as effective as sanitary confinement, hence the need to make it compulsory for all.”

Wearing masks was not mandatory in public spaces in Algeria until Monday evening.

In order to cope with the shortage of masks, Trade Minister Kamel Rezig said Monday that the state temporarily authorized the production of masks for the general public without the need to be recorded in the trade register, because of the “exceptional” health context.

Additional measures, which need to be detailed, are planned for Eid el-Fitr, the festival marking the end of the fasting month of Ramadan, slated for 23 or 24 May.

These measures will cover containment schedules, travel within the province and visits to cemeteries. During Eid el-Fitr, it is traditional to make family visits and to visit the graves of relatives.

These new measures will be in addition to those already taken during the health confinement, such as the introduction of curfews, the closure of schools and mosques, and the banning of all public gatherings.

This last point led to the suspension in mid-March of demonstrations by “Hirak”, the anti-regime protest movement that the country has been witnessing for more than a year.

Algeria is one of the countries most affected in Africa by the new coronavirus. More than 550 deaths have been recorded there since the first case was registered on 25 February, according to the scientific committee’s spokesman, Djamel Fourar.

A total of 7,201 cases of Covid-19 disease had been officially reported on Algerian soil on Tuesday morning.