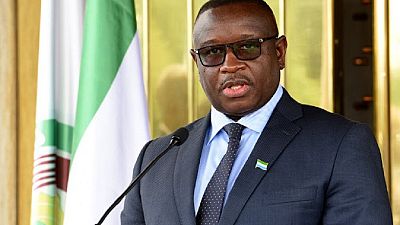 Two guards and five inmates of a prison in Sierra Leone’s capital Freetown were killed on Wednesday in a riot described by authorities as an attempted escape, according to a new report released by police.

The cause of the mutiny by the inmates of Pademba Road Prison, who set fire to part of the 100-year-old facility, remain unclear.

This morning, we noticed that a fire was burning inside the prison and heard the inmates shouting for help.

A prison spokesman, Cecil Cole Showers, initially reported that one guard was killed and several dozen of his colleagues and inmates injured during the riot.

“This morning, we noticed that a fire was burning inside the prison and heard the inmates shouting for help,” he said.

A local resident told AFP he heard shots. The security forces cordoned off the area and ordered the residents to stay home.

In the evening, the government referred in a statement to an “attempted escape” and condemned “this attempt to destabilise the security of the state”, without giving further details, but adding that an investigation had been opened.

The riot occurred after the justice ministry announced on Monday that one of the detainees had tested positive for the new coronavirus the day before.

The authorities had subsequently announced the closure for disinfection purposes of the section through which he had passed before being referred to a hospital. The other detainees in this section were moved and placed under health surveillance, according to the Ministry.

The Ministry of Justice has also suspended court activities for one month to avoid contamination during prisoner transfers.

Sierra Leone has registered 116 cases of coronavirus, including four deaths.

Its prisons are dilapidated and generally overcrowded. Local NGOs have recently called on the government to release prisoners imprisoned for minor offences in order to combat the spread of Covid-19.