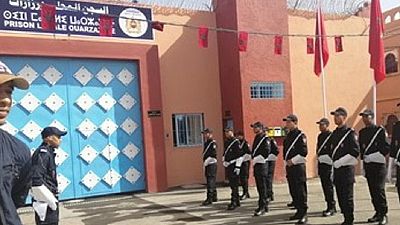 More than 300 cases of people infected with Covid-19 were detected in three prisons in Morocco, after a screening campaign conducted in the 73 prisons of the kingdom, prison authorities said Tuesday.

Out of 1,736 people subjected to screening tests in prisons, 313 cases of contamination have been recorded so far.

In the prison of Ouarzazate (south) 303 positive cases have been recorded , according to a statement by the General Delegation for Prison Administration and Rehabilitation (DGAPR).

The two other prisons affected are those of Marrakech (centre) and Ksar Kebir (north) with 10 cases. Confirmatory tests are under way for two employees and three inmates of the Tangiers prison.

At the beginning of the pandemic, the administration had tightened health measures, reduced visiting rights and suspended all activities involving outside actors. In March, prison officials had also been subjected to quarantines.

Last week, the detection of the first cases in Ouarzazate prison led the prison administration to launch testing of population samples in all prisons.

Contaminated inmates were placed in mobile isolation units, officials were hospitalized and protective clothing was distributed to prison staff, according to the DGAPR.

To limit the risk of contagion, the authorities have prohibited the transfer of prisoners to courts and public hospitals, except in extreme emergencies. Remote hearings have begun in various courts. New arrivals are tested for HIV.

There are nearly 80,000 inmates in Moroccan prisons. In early April, more than 5,654 inmates were pardoned by the king to reduce the risk of spreading the virus in notoriously overcrowded prisons.

At the same time, between 16 March and 21 April, prisons registered 5,484 new arrivals, according to DGAPR figures.

The official balance sheet of contaminations is 4,252 confirmed cases, with 165 deaths and 778 recoveries.