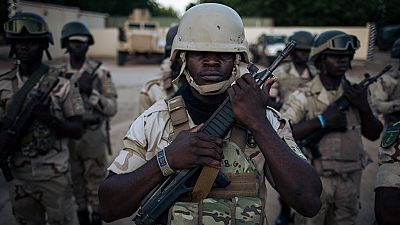 <p>Cameroon’s President Paul Biya has acknowledged that the military massacred innocent people, including women and children, in a northwestern village in February after the government first denied it.</p> <p>“The corpses of the three women and 10 children, whom the military killed and tried to cover up their actions by also torching several houses and blaming separatist fighters, will be exhumed for the state to conduct decent burials,” a statement from Biya’s office said.</p> <p>The president has asked for legal action, it said. Three soldiers have already been arrested.</p> <p>Innocent Laban, a spokesman for the people of the English-speaking northwestern village of Ngarr-buh who escaped fighting between armed separatists and the military, said he was pleased that Biya was for once acknowledging that troops have committed atrocities.</p> <p>Laban called on Biya to apologize to the rights groups he accused of fabricating the massacre to tarnish the military’s image.</p> <p>“This declaration comes to confirm the fact that the Cameroonian military is so unprofessional. A military that is killing the people rather than protecting them,” he said. “This comes to show us that human rights activists are doing a good job.”</p> <p>On the night of Feb. 14, residents said, soldiers raided their village and killed dozens of people. An international outcry by civil society organizations and rights groups followed, but the government said the military was professional and did not commit atrocities.</p> <p>Biya later ordered independent investigations, and rights groups said he was bowing to international pressure.</p> <p>Ilaria Allegrozzi, senior researcher for central Africa at Human Rights Watch, said Biya’s decision to punish the military members involved marks a step in the right direction, although the group disagrees on the number of people killed.</p> <p>The United Nations has said 22 people were killed in Ngarr-buh, 14 of them children, and at least 600 people fled. Human Rights Watch said the death toll was 21.</p> <p>Allegrozzi said investigations should also be opened into other alleged crimes committed by the military while fighting Boko Haram extremists as well as separatists who seek a state for English-speakers in the majority French-speaking nation.</p> <p>“It is a very good first step because there are other abuses and crimes that have been committed in the Anglophone regions and beyond by both the security forces and armed groups, and these crimes deserve the same level of attention,” Allegrozzi said. </p> <p>“We also welcome president Biya’s call for increased collaboration with human rights groups, and we wish that this represents a change in the way government views human rights organizations.”</p> <p>This is not the first time that Cameroon, after international pressure, acknowledged its soldiers committed atrocities. </p> <p>Soldiers were arrested in 2018 after a video circulated on social media showing two women, one with an infant, killed by soldiers deployed to the northern border with Nigeria to fight Boko Haram.</p> <p><strong><em>AP</em></strong></p>

This declaration comes to confirm the fact that the Cameroonian military is so unprofessional. A military that is killing the people rather than protecting them. This comes to show us that human rights activists are doing a good job.