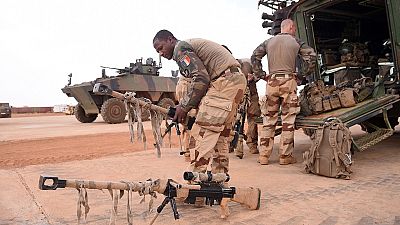 <p>Both the Islamic State group and al-Qaeda see the coronavirus as a threat, but some of their fighters also see the upheaval from the pandemic as an opportunity to win over more supporters and strike harder than before.</p> <p>Messages from the Islamic extremist groups show concern about the virus mixed with bravado, asserting that it is punishment for non-Muslims while also urging followers to repent and take care of themselves.</p> <p>Al-Qaeda suggested in a statement Tuesday that non-Muslims use their time in quarantine to learn about Islam. But in a sharp commentary in its al-Naba newsletter in mid-March, IS urged followers to show no mercy and launch attacks in this time of crisis.</p> <p>In a commentary Tuesday, the International Crisis Group warned that the pandemic threatens the global solidarity that is key to fighting extremists.</p> <p>“It is almost certainly correct that <span class="caps">COVID</span>-19 will handicap domestic security efforts and international counter-<span class="caps">ISIS</span> cooperation, allowing the jihadists to better prepare spectacular terror attacks,” it said.</p> <p>Though analysts said it was too soon to say which attacks can be blamed on militants exploiting the coronavirus, extremists in late March carried out their deadliest assault yet against the military of Chad, a significant contributor to Africa’s growing counterterrorism efforts, killing at least 92 soldiers near the border with Nigeria and Niger.</p> <p>In Egypt, two military officials reported a spike in IS attacks in March in the restive northern part of the Sinai Peninsula but security forces foiled at least three other major assaults. The officials spoke on condition of anonymity because they were not authorized to brief the media.</p> <p>While Syria and Iraq have seen no uptick in attacks by IS since the virus spread there, the pandemic has prompted the U.S.-led coalition to halt training activities in Iraq amid a planned pullout from several bases.</p> <p>There are signs elsewhere that the U.S., British and other militaries are pulling back because of the virus, leaving a possible opening for the extremists.</p> <p>That’s a danger in Africa’s hot spots of the Sahel, the Lake Chad region and Somalia, where the U.S. military already worried allies in recent months by contemplating cuts to focus on threats from China and Russia.</p> <p>“Any state that was interested in pulling back in Africa will take the opportunity to do so,” said Clionadh Raleigh, executive director of the Armed Conflict Location & Event Data Project, which tracks extremists’ activities worldwide. “That will be unbelievably bad.”</p> <p><strong><em>AP</em></strong></p>