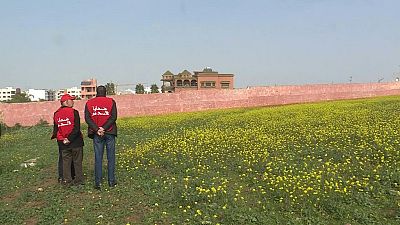 “Give us our money!”, demands a group of home buyers, standing on land that should by now be finished condos — one of many fictitious projects that together comprise what is described as Morocco’s biggest-ever property scam.

Adverts on state television had promised dream homes at three for the price of two, while brochures boasted of ornately carved wood finishings and copious marble.

But it was all a fantasy — more than 600 million dirhams (about 57 million euros, $65 million) allegedly disappeared, leaving more than 1,000 buyers out-of-pocket, according to one of the lawyers representing them.

In a country where corruption is endemic, the unprecedented scale of the alleged fraud has generated political waves.

Called upon by deputies to address the issue in parliament, Prime Minister Saad Eddine El Othmani said the government was absolved of any blame, provoking indignation among defrauded investors who have appealed to King Mohammed VI.

The man accused of being at the forefront of the scheme has been charged and is in detention awaiting trial.

But the vast scam has prompted major questions about alleged negligence and complicity of some Moroccan institutions.

Mohamed el Ouardi, as head of the Bab Darna group, allegedly received advances for apartments that never made it beyond the paper they were drawn on.

“The swimming pool would have been just over there,” scoffs would-be apartment owner Soufiane, aged in his 40s, as he points across a building site in the commercial capital Casablanca.

Bab Darna consists of a group of firms that cashed advances from “at least 1,000 victims” who invested in around 15 fictitious real-estate projects in and around Casablanca over a decade, Mourad el Ajouti, one of the lawyers for the investors, told AFP.

The money was allegedly embezzled by cashing “advances ranging from 20 percent” to the full cost of the apartment, he added.

Houria, 49, who works in e-commerce, said “highly persuasive sales agents” proffered a golden opportunity and swayed her into advancing 400,000 dirhams; 20 percent of the cost of a villa.

But the vendor “had neither the title deed nor construction permit”, el Ajouti said; basic requirements lacking in all contracts signed by the investors.

Such practices did not prevent Bab Darna from exhibiting with great fanfare at real-estate shows in Casablanca, Paris and Brussels.

“The authorities were not aware (of el Ouardi’s activities)?” asked Houria, dumbfounded.

She, like other victims that AFP spoke to, did not want their full names published.

El Ouardi, 59, is described as a smooth salesman who carved a path through the real-estate jungle.

But in November, with nothing to show for their investments, angry customers went round to his home.

When cheques for reimbursements that they say he penned personally bounced, their patience finally ran out and they hauled him to the police station.

He is currently awaiting trial with six alleged accomplices — his finance manager, the notary and sales agents.

A trial date has not yet been set, but the suspects face between 10 and 20 years in prison for fraud or complicity in fraud.

Many of the victims come from Morocco’s diaspora, who number several million and often invest in property back home.

“I left Morocco to escape corruption and nepotism, but these things have entrapped me once more,” lamented another victim Youssef, 36, who lives in Japan and is self-employed.

Sifeddine, an entrepreneur living in Argentina, reserved an apartment thanks to a brochure promoting modern buildings covered in ivy, alongside elegant palm trees shading a turquoise pool.

The TV adverts, broadcast during primetime hours and using famous actors, reassured him.

“El Ouardi received me at his villa and was very persuasive, in front of a notary and agent,” he said.

“It was 10pm, the sub-municipality’s office was opened specially at his request to sign the contract; he must have greased a lot of palms,”, Sifeddine alleged.

Jalal, a salesman in his 40s of dual French-Moroccan nationality, took the plunge in 2018 when he visited a Moroccan real-estate show in Paris.

Bab Darna “had one of the best stands” at the show, known as Smap Immo, he said.

He came back to Morocco to sign the deal, and took the presence of a notary and registration of the contract at a sub-municipality office as guarantees of legitimacy.

El Ajouti views the scandal as a collective failure of multiple institutions.

“Authorities within the planning ministry, the town council, the urban agency” should all shoulder shares of the blame, he said.

He also criticised officials from the real-estate show, who, he said, should have scrutinised exhibitors’ credibility.

Smap Immo, which rejects it is in any way responsible for the scandal, has itself filed a complaint against Bab Darna for fraud and harming the exhibition’s reputation.

Real estate is among the sectors most affected by corruption in Morocco, according to the head of Transparency Maroc, a local anti-graft advocacy group.

The sector is “a hotbed of corruption, conflicts of interest and insider trading between landowners, local authorities and urban agencies”, Ahmed Bernoussi said.

One Moroccan architect, who did not want to give his name, said “agents work hand-in-hand with elected officials, who often themselves become real-estate developers.”

Bernoussi points to the recent sentencing of a former head of a southern Marrakesh urban planning department to 10 years in prison for demanding bribes in return for speeding up the granting of permits.

Nevertheless, the Bab Darna affair has “dealt a strong blow to the credibility of the sector”, Anis Benjelloun, vice-president of Morocco’s federation of real-estate agents, said.

“The federation has repeatedly deplored this sort of practice,” he added, describing the affair as “a scam permitted by a flawed system.”

So will it lead to change to give more protection to home buyers in future?

“We must strengthen our efforts to correct them,” she said.

Sales based solely on paper plans regularly give rise to scandal in Morocco, ranging from apartments that do not match brochures’ promises to major delays in construction.

The sector is regulated by a 2002 law, which was amended in 2016 — but a decree needed to implement that overhaul is still pending.

That decree is “in the process of being finalised”, Bouchareb said.