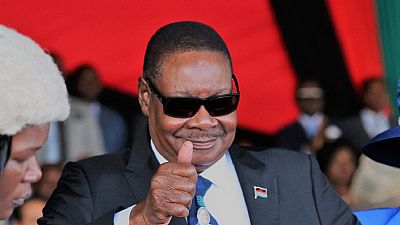 Malawi’s President Peter Mutharika has sacked the country’s military chief, General Vincent Nundwe. The army has been hailed in the aftermath of a court’s annulment of May 2019 general elections.

Mutharika’s re-election was overturned by a successful opposition petition. The rerun of the poll has been ordered by the court. Parliament set a new date and passed an electoral reform bill which the president on Tuesday refused to sign citing unconstitutionality of portions.

Protesters who took to the streets protesting the outcome of the polls reported enjoying support and protection of the army. Major opposition voices also spoke in glowing terms of the role the army is playing in the protests.

The MDF is one institution the people of Malawi have always been able to count on to uphold the constitution in times of political crisis.

In several instances when the police and protesters have clashed, the army have stepped in to restore order and calm and protected demonstrators.

While deploying forces in August 2019, the now dismissed Malawi Defence Forces (MDF) commander Vincent Nundwe declared that his “priority is to ensure that Malawi is sovereign as well as peaceful.”

Praise, criticism for the army

Leading opposition politicians including the former vice-president Saulos Chilima have praised the army’s role in protecting citizens. “They stood up to their billing and reputation as one of the most professional armies in Africa and the world,” Chilima said early this month.

“The MDF is one institution the people of Malawi have always been able to count on to uphold the constitution in times of political crisis,” said main opposition Malawi Congress Party leader Lazarus Chakwera.

But for the president’s supporters, the army was soft on protesters. “People can protest and hold demonstrations in a democracy but my only issue was that these weren’t peaceful demonstrations,” said Joshua Khan, a Democratic Progressive Party activist.

“You don’t claim to fight for your rights while infringing on other peoples rights,” he said. “The army should have stopped the demos. People even died! And MDF seemed to be okay with it”.

In a continent where armies often prop up governments, crush dissent and interfere in mainstream politics, Malawi in southern Africa has been an exception for decades.

From Sudan to Zimbabwe to Ivory Coast and Guinea-Bissau, the military has had a long track record of being state flunkeys, breaching the neutral role it is supposed to maintain.

But Malawi, which was ruled with an iron fist by founding president Kamuzu Banda since independence from Britain in 1964, broke out of that mould in 1993, a year before Banda lost in the country’s first multi-party polls.

Although allegiance to Banda was enforced at every level, the army swiftly dismantled the dictator’s renegade paramilitary wing, the Malawi Young Pioneers, and Banda lost power in 1994.