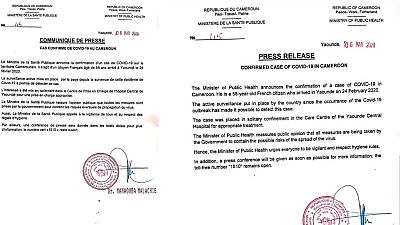 Cameroon’s health minister on Friday said a first case of the coronavirus has been confirmed in the country, saying that the patient is a Frenchman who arrived in Yaounde on February 24.

Cameroon is therefore the first country in central Africa and the eighth country on the continent to announce a case of the new coronavirus.

“The Minister of Public Health announces the confirmation of a case of Covid-19 (coronavirus) on Cameroonian territory,” wrote Manaouda Malachie in a press release.

The carrier of the virus is “a French citizen, aged 58, who arrived in Yaoundé on 24 February,” he said.

The patient has been placed “in isolation in a care centre” at Yaoundé‘s central hospital, one of the main public hospitals, according to Mr. Malachie, who assures that it is the “active surveillance” put in place by Cameroon that “has made it possible to detect this case”.

“In Cameroon, the laboratory at the Centre Pasteur has the tools and capacity for rapid diagnosis of cases,” Clavère Nken, head of communication at the Ministry of Health, told AFP at the end of February.

In addition, controls have been established at air and sea entry points into the country, he said.

Worldwide, nearly 100,000 known or proven cases of new coronavirus have been recorded since the beginning of the epidemic, including 3,300 deaths, in more than 80 countries and territories, according to an AFP count.