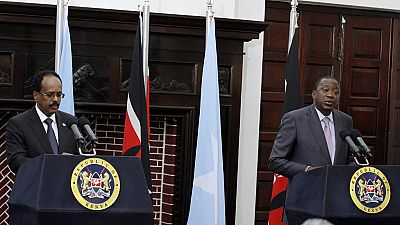 Kenyatta’s comments came after he chaired a special National Security Council session, the president is said to have alleged that actions of Somalia Army on 2nd March, 2020 were in “flagrant breach” of Kenya’s sovereignty.

Reports earlier this week indicated that residents in Kenya’s Mandera County were forced to flee following clashes between the Somali National Army, SNA, and forces of its Jubaland region in the town of Bulla Hawa.

“Heavy gunfire and explosions coupled with black smoke could be seen emanating in Bulla Hawa in Somalia which borders Mandera town,” the Star newspaper said in a report.

“.. the foreign soldiers in flagrant breach and total disregard of international laws and conventions engaged in aggressive and belligerent activities by harassing and destroying properties of Kenyan citizens living in the border town of Mandera,” Uhuru said on Wednesday.

Kenya’s position is however coming a week after Somalia issued a similar statement with respect to Nairobi “violating” its sovereignty and destabilising common border areas.

“Between 1145HRS & 1230HRS, a suspected-state actor remotely jammed, from inside Somalia, the Safaricom Base Transmission Station mast (BTS) in Mandera along the border rendering communication in the area temporarily impossible.

“The mast serves residents who use the border area including herders and traders,” a terrorism intelligence website said on Monday.

In the middle of November last year, the two leaders met in Nairobi pledging to mend relations despite a raging maritime boundary disagreement.

Kenyatta and his Somali counterpart Mohamed Abdullahi Farmaajo reaffirmed the invaluable relations between the two neighbours during a joint press conference after a closed-door meeting.

Kenya’s Foreign Affairs chief, Monica Juma wrote on Twitter: “The two principals agreed to bring normality to our bilateral relations and do everything to ensure peaceful relations including obtaining visas on arrival to encourage free movement of our people.”

The Somali leader also expressed gratitude to Kenya for its role in AMISOM, the African Union peacekeeping mission fighting insurgent group, Al-Shabaab and its role in sheltering Somali refugees fleeing conflict back home.

On the substantive issue of the maritime boundary, Farmaajo said he had confidence that the International Court of justice, ICJ, seized with the matter will deliver a mutually acceptable resolution when it rules on the matter in the months ahead.