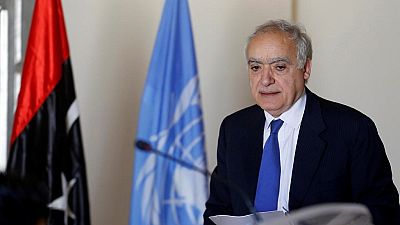 Lebanese academic and diplomat Ghassan Salamé has been at the post since 22 July 2017, when he was appointed by UN Secretary-General António Guterres.

He has been at the heart of all recent efforts to mediate in the military and political stalemate bedeviling the north African country. Salamé is on record to have strongly advocated for rival parties to work towards a peaceful Libya.

Mr. Ghassan Salamé before 2017 had three decades of experience in public service and academia. In 2003, he served as the Political Advisor to the United Nations Assistance Mission for Iraq (UNAMI), where he played a crucial role in bringing together Iraqi factions.

For most of his career, Mr. Salamé was professor of International Relations at Sciences-Po (Paris) and he is the founding Dean of its Paris School of International Affairs – PSIA. Mr. Salamé received a B.A. and M.A. in Public Law from Saint-Joseph University in Lebanon, Ph.Ds. in Humanities from Paris III Sorbonne- Nouvelle University and in Political Science from the Paris I Panthéon-Sorbonne University.

Born in 1951, he is married and has two daughters.