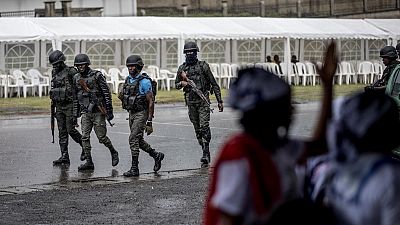 <p><strong>Cameroon’s army on Monday explained the incident in which 22 civilians were killed in the Northwest region, described it as an “unfortunate accident” caused by an explosion of fuel during a firefight.</strong></p> <p>Opposition parties had accused the army of orchestrating a massacre, but army spokesman Colonel Cyrille Atonfack Guemo described the allegations as “duplicitous”.</p> <p>The United Nations said up to 22 civilians, 14 of them children, died in Friday’s incident, which happened in in the village of Ntumbo in Cameroon’s Northwest Region, one of two English-speaking regions that have been grappling with separatist violence since October 2017.</p> <h2 style="font-size:16px;">The army’s explanation</h2> <p>An army investigation, he said, found that the deaths happened after fuel was set ablaze during a gunfight with anglophone separatists.</p> <p>Five civilians, a woman and four children, died, and “seven terrorists” were “neutralised”, Atonfack told <span class="caps">AFP</span> in Libreville by phone.</p> <p>More than 3,000 people have died and at least 700,000 have fled their homes.</p> <p>“It was quite simply an unfortunate accident, the collateral result of security operations in the region,” Atonfack said in a statement.</p> <p>He said four soldiers and two gendarmes had been carrying out nighttime reconnaissance on foot near a home that had been “transformed into a fortress” with a stockpile of weapons.</p> <p>They came under heavy fire, and exchanges caused “several containers of fuel to explode, followed by a blaze which spread several neighbouring homes”, Atonfack said.</p> <p>Defense Chief of Staff Lt. Gen. Rene Claude Meke said told state broadcaster <span class="caps">CRTV</span> the military has been professional in its fight against the separatists.</p> <p>“We need of the support of the population in these difficult moments,” he said. “They should come to us, inform us and strictly respect orders and advice we give to them so that this crisis which has overstayed should come to an end.”</p> <h2 style="font-size:16px;">Aid workers narrate what happened</h2> <p>On Sunday, James Nunan, a local official with UN humanitarian coordination agency <span class="caps">OCHA</span>, told <span class="caps">AFP</span> that “armed men” had killed as many as 22 civilians, including a pregnant woman and 14 young children.</p> <p>Eleven of the children were girls, said Nunan, head of <span class="caps">OCHA</span>’s office for the Northwest and Southwest regions.</p> <p>Aid workers contacted by <span class="caps">AFP</span> said witnesses had told them that between 40 and 50 armed men, some wearing army uniform and some wearing masks, entered Ngarbuh, a district of the village, before shooting inhabitants dead and burning them.</p> <p>“They fired on people and burned victims, their bodies are in a terrible state,” said an aid worker, speaking on condition of anonymity.</p> <p>“People phoned us to say that soldiers had come and smashed down doors, opened fire on people and set homes on fire,” Ntumbo resident Louis Panlanjo, a member of a local association, told <span class="caps">AFP</span>.</p> <p>“People took shelter in the centre of the village. There was about 800 of them.”</p> <h2 style="font-size:16px;">Opposition parties outraged</h2> <p>Bruno Ngeh, a 38-year-old teacher who escaped the attack, said he lost many family members including his wife’s aunt and her eight children. He said the military was responsible for the killings.</p> <p>“Little babies, pregnant women were killed. How do you explain this?” he asked. “They never knew that they will be killed in their sleep by the very military that is supposed to protect them.”</p> <p>A resident who wanted to remain anonymous told <span class="caps">AFP</span> by phone that 35 bodies had been recovered and the army was to blame.</p> <p>The Movement for the Rebirth of Cameroon (<span class="caps">MRC</span>), one of the two main opposition parties, blamed “these crimes” mainly on the regime and the head of the security forces.</p> <p>A key figure in the separatist movement, lawyer Felix Agbor Mballa, in a Facebook post also accused “state defence forces” of carrying out the killings.</p> <p>Samuel Ikome Sako, who calls himself interim president of the Republic of Ambazonia, the state claimed by the separatists, blamed the military for the deaths of civilians.</p> <p>“Our own people are living in forests like animals,” he said. “This is wickedness, this is genocide going on. We are losing hundreds per day.”</p> <h2 style="font-size:16px;">The Anglophone crisis</h2> <p>English-speakers account for nearly a fifth of Cameroon’s population of 24 million, who are majority French-speaking.</p> <p>Years of grievances at perceived discrimination snowballed into a declaration of independence in October 2017 and a government crackdown.</p> <p>The declaration has not been recognised internationally although the government has lately decentralised some of its powers.</p> <p>The UN refugee agency said on Thursday that almost 8,000 people had fled into Nigeria from Cameroon in the previous two weeks to escape the fighting, bringing the number of refugees to almost 60,000.</p> <p>Once considered a haven of stability in central Africa, Cameroon has for the last seven years seen the jihadist group Boko Haram kill soldiers and civilians in the north.</p> <p>In the latest attack, three people were killed on Saturday when Boko Haram militants set fire to around 100 homes, looted shops and stole grain, security officials said.</p> <p>Meanwhile, the much-delayed trial was due to begin on Monday of seven soldiers accused of killing two women and their babies in 2015. However, the trial in the capital Yaounde had not started by Monday evening.</p> <p>The murders, which came to light through a video on the internet, were initially dismissed as “fake news” by the government, which later investigated the incident and arrested seven suspects.</p> <p><strong><em>Agencies</em></strong></p>

Little babies, pregnant women were killed. How do you explain this?