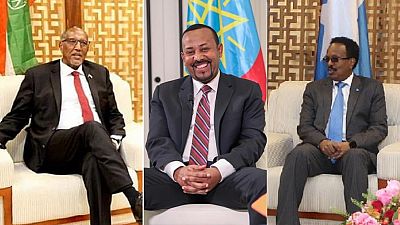 A high-ranking official in Somaliland had confirmed a proposed visit to Hargeisa by Abiy and Farmaajo on the initiative of the PM. Hargeisa is capital of Somaliland, an autonomous region of Somalia.

Voice of America journalist and author of “Inside AlShabab,” Harun Maruf posted a tweet that said Somaliland’s chairman of House of Elders Suleiman Mohamoud Aden as saying PM Abiy Ahmed was “pushing for a joint visit to Hargeisa by him and Somalia President Mohamed Abdullahi Farmajo.”

It is the first concrete report of an information that started making the rounds on Twitter on Saturday evening when a post to that effect was made by one Khaalid Foodhaadhi.

A meeting between leaders of Somalia and Somaliland in Addis Ababa was brokered by Abiy last week after the 33rd African Union summit.

The Somali presidential spokesman confirmed that the “ice-breaking” meeting had indeed taken place between Farmaajo and Somaliland’s Muse Bihi.

Days later, Farmaajo made a public admission over excesses by the Siad Barre regime in the late eighties against Somaliland. An admission that received largely good comments on social media.

The planned joint visit to Hargeisa has also received positive traction as many people on social media see it as a positive first step towards finding an amicable solution to the longstanding rift between Somalia and Somaliland.

This is following the recent meeting that Somalia and #Somaliland presidents have met in Addis Ababa. pic.twitter.com/yNtdq6weSq