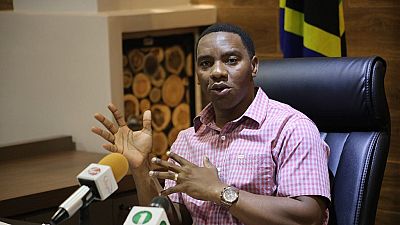 <p>The United States has sanctioned a Tanzanian official who sparked fear in the gay community by announcing plans to track and punish homosexuals in the East African nation.</p> <p>The U.S. statement Friday said Paul Christian Makonda, regional commissioner for Dar es Salaam, is accused of “targeting marginalized individuals,” repressing the opposition and cracking down on freedom of expression.</p> <p>In a travel warning in December, the U.S. said “individuals detained under suspicion of same-sex sexual conduct could be subject to forced anal examinations.”</p> <p>The new statement also says the U.S. is deeply concerned with the deteriorating respect for human rights in Tanzania, whose first-term President John Magufuli has been accused by rights groups of widespread repression of the opposition, journalists and others.</p> <p>The U.S. statement comes ahead of Tanzania’s presidential election in October. A separate statement by the U.S. Embassy on Friday said it was encouraged by Magufuli’s assurances of a “free, fair, and transparent” vote and his invitation to international observers.</p> <p><strong><em>AP</em></strong></p>