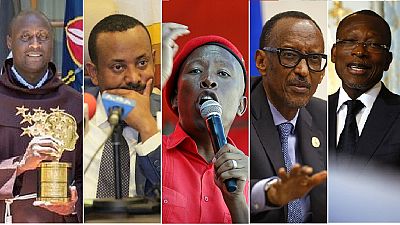 Winding down the 2019 clock, here at Africanews we relive what made top news across the continent. This section of our 2019 Review returns to some of the top quotes that newsmakers made.

We help you with a context and in most cases when the statements were made. It ranges from swipes at internet and social media to issues of human rights and diplomacy.

In there is the World’s best teacher winner. A number of African presidents also made the cut as did a history making sportsman. Feel free to pick your best and let us know through our social media handles.

“Changing the government and changing the president will not be through WhatsApp nor Facebook, but will be through the ballot box.” Omar al-Bashir speaking in January 2019 in Kassala

“I will congratulate myself, I’m going to be the winner. Thank you very much.” Nigeria president Muhammadu Buhari after casting his ballot in February 2019 general elections.

“We don’t want to boast about our own might. But are you going to recruit a million people or are you going to build the dam? Our resources shouldn’t be wasted in conflict and wars which cost millions. Use that money for development of people and our countries instead,” Egypt president Al-Sisi responds to Ethiopia’s “ready for war” posture over Nile dispute.

“Before prematurely charting out new and permanent sustainable development programmes, it is imperative that we conduct extensive political, economic and security appraisals so as to properly diagnose the unfolding realities with requisite depth.

“We cannot make hasty and emotional conclusions before we collect adequate information, analyze these data comprehensively with patience so as to have a clear picture. Hence, our focus should be geared towards patient appraisal of the unfolding reality.” Eritrea president during first independence celebration post Ethio-Eritrea peace.

“Internet is not water, internet is not air. Internet is very important. However, if we use it as a revolution tool to incite others to kill and burn, it will be shut down not only for a week, but longer than that. For sake of national security, internet and social media could be blocked any time necessary.

“As long as it is deemed necessary to save lives and prevent property damages, the internet would be closed permanently, let alone for a week,” Ethiopia Prime Minister Abiy Ahmed during an August 1 press conference.

“(An Africa) … where all member states will be held accountable, we want Africa to be one. With this South Africa, it is just a starting point. And why? Because political freedom came from up there in the north. Economic freedom must come from the south going up there.” Leader of South Africa’s opposition Economic Freedom Fighters, Julius Malema in mid-December.

“We unanimously agree on this, to end this model. The central banks of African countries of WAMU (West African Monetary Union) will manage all of these foreign currency reserves and will distribute them to the various central banks partners in the world.” Benin president on Francophone West Africa ditching the CFA Franc.

“[Europe] is violating people’s rights, with this problem of people being bundled and sent back to sink in the Mediterranean and so many people being mistreated in your own country. You really need to stop this superiority complex nonsense about human rights.

“You think you are the only ones who respect human rights, all others are about violating human rights. No, we’ve fought for human rights and freedoms for our people much better [than] you people who keep talking about this nonsense.” Rwanda president Kagame slams the West’s holier than thou attitude over human rights.

“This prize does not recognise me but recognises this great continent’s young people. I am only here because of what my students have achieved. This prize gives them a chance. It tells the world that they can do anything.

‘‘Africa will produce scientists, engineers, entrepreneurs whose names will be one day famous in every corner of the world. And girls will be a huge part of this story.” Peter Tabichi, Kenyan who won Global Teacher Prize 2019 award.

“I want to commend the people of Zimbabwe for rejecting the machinations by those with unbridled political ambitions who are even prepared to use violence, divisions and disunity and violent demonstrations in order to acquire power.

“The party should never be distracted by those who make irritating noises within the country and those on Twitter and other social media platforms.” Zimbabwe president tells party to stay united and fend off distraction by social media, .

“These losses, on account of floods and landslides, are, mainly, due to the mistake of insisting on settling (living) in areas that logic and God did not intend for human habitation. These are the wetlands (and steep mountains of 31-32% gradient or more than that.” Uganda president takes swipe at victims of natural disasters in December 2019.