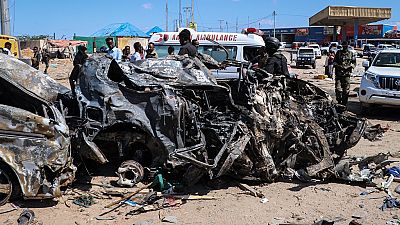 Somalia’s intelligence services on Monday said they believe a foreign country ‘planned’ Saturday’s deadly bombing that killed over 90 people in the capital Mogadishu.

The intelligence report, which has not yet been publicly released does not however have evidence supporting this claim, according to Voice of America journalist Harun Maruf.

Qatar and Turkey have provided emergency support to the Somali authorities including medical supplies, personnel and first aid.

A Turkish military cargo plane on Sunday evacuated people badly wounded including two of its nationals wounded in the devastating truck bombing.

The plane also brought emergency medical staff and supplies, the Turkish embassy said in a tweet, adding these had been taken to a Turkish-run hospital in Mogadishu.

Somali Information Minister Mohamed Abdi Hayir Mareye told state media that 10 Somalis who were badly wounded in Saturday’s blast would be evacuated to Turkey. Turkey had sent 24 doctors to treat those wounded who would not be evacuated, he added.

The United States carries out regular air strikes in Somalia in support of a weak, United Nations-backed government in Mogadishu, which has fought al Shabaab for years.

“The U.S. and the Federal Government of Somalia will continue to increase pressure on the terrorist organization in order to deny them the ability to plot terrorist attacks,” the AFRICOM statement said.

Plans by the United States to withdraw hundreds of troops from Africa could curtail the fight against al Shabaab and other militant groups across the continent.