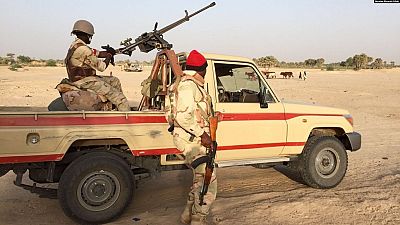 Islamic extremists on motorcycles killed 14 security force members who were escorting election officials in the West African nation of Niger, the first large attack there since 71 soldiers were killed in a massive ambush earlier this month, authorities said Thursday.

The attack took place Wednesday night near Sanam, which is about 200 kilometers (125 miles) from the capital of Niamey, according to a government statement. Officials from the national electoral commission were in the area to conduct a census before next year’s vote.

Niger has long been vulnerable to Islamic extremism because it shares a border with Nigeria, where Boko Haram insurgents have been carrying out attacks for a decade.

But now Niger is increasingly threatened by extremists from the Islamic State in the Greater Sahara group, which carried out a 2017 attack that left four U.S. service members dead in Niger. Those same extremists who are active along the Niger-Mali border also claimed the unprecedented massacre at the army camp earlier this month that left 71 dead.

Niger’s military has undergone training for years from both American and French forces, but the Dec. 10 attack near the town of Inates underscored the threat extremists still pose. French President Emmanuel Macron has postponed a meeting with Niger’s president and other regional leaders until January.

Niger is also a member of the G5 Sahel regional military force — along with Burkina Faso, Chad, Mali and Mauritania — which has unsuccessfully tried to drive jihadis out of the vast region south of the Sahara desert. The cross-border joint force was launched in July 2017, but has been beset by financial shortfalls and other challenges.

The crisis across the Sahel has deepened over the past year, particularly in Mali and Burkina Faso. Jihadi attacks on military outposts became so frequent that Mali’s president shut down the most remote and vulnerable as part of a military reorganization.