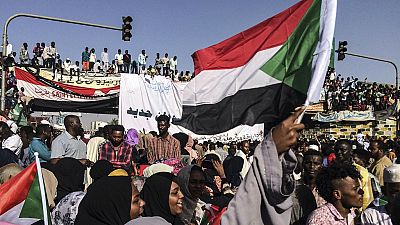 Protests are another plank of the routine news incident year in and out. 2019 had her fair share of protests from North, West, East and Southern Africa.

The reasons for these protests were largely political, followed by economic and then demand for human rights in some instances not to forget issues of ethnic tensions and insecurity.

We look back at how these protests were started, what they achieved and their current statuses. This is part of our review into the exiting news year.

Liberia continued suffering economic headaches across the year. Which situation caused opposition and activists to call for protests in the capital Monrovia and other parts of the West African country.

The protests amongst others were against failures to tackle corruption, economic mismanagement and injustice under the former world best footballer turned president George Weah.

Police banned a number of the protests calling them illegal. The final protest for 2019 was eventually postponed to early January 2020.

The United Nations, regional bloc ECOWAS and the United States have urged both parties to hold talks.

Algeria – marching before and after Bouteflika ouster

Algerians took to the streets early this year when President Abdul Aziz Bouteflika signaled that he was going to contest in elections despite being sick for the last few years.

Bouteflika will eventually back down from contesting and be forced to step down as president. That will not stop the protests which rolled on despite a December date for elections.

Interim President AbdulKader Salah held the fort as Bouteflika era officials were rounded up and put before courts for corruption. The divisive polls produce Abdelmadjid Tebounne as new president yet the protests continue.

In Sudan, the protests that took off in Atbara in late December 2018 spread across the country putting pressure on president Omar al-Bashir. The economic demands soon morphed into a pro-democracy mass movement.

Bashir increasingly pressured announced a state of emergency which was defied by protesters. The military took over and place Bashir under house arrest. The next phase was a battle for power to be handed back to civilians.

A deal was reached thanks to African Union and Ethiopian intervention. A sovereign council is currently in place with a civilian Prime Minister Abdalla Hamdock. Bashir is behind bars on corruption charges, other cases are still pending. The protesters meanwhile continue to demand for justice for victims of the #SudanRevolution.

Guinea president Alpha Conde ordinarily would have been lacing his boots to exit after a decade in charge but as long speculated, he has plans to stay longer and that was the basis of protests in the West African country.

Protesters took to the streets of the capital Conakry and other cities under the umbrella of an opposition coalition. Clashes withe the security forces led to deaths and injuries whiles a number of activists have been jailed for their role in the protests.

Meanwhile, the president has officially ordered that plans be rolled out for a referendum that will allow citizens decide on whether or not the constitution should be altered. The opposition have called it a coup and vowed to sternly oppose it.

In Cameroon, protest action was centered on the political side of events with a police ban on rallies by followers of losing presidential aspirant Maurice Kamto.

Kamto had been held in custody over charges of terrorism and threat to the state but was later released by the authorities on grounds of pardon.

The restive Anglophone regions saw more clashes between security forces and separatists along with the attendant displacement of citizens who either fled to the French speaking side of the country or across the border into Nigeria.

Late in the year, a group of academicians also staged a protest over postings leading to a police clampdown. A number of them also went on hunger strike to press for their demands.

In Nigeria, the routine clashes between Shi’ites and police continued with deadly consequences on the part of the police and the protesters. Leader El-Zakzaky was allowed to seek treatment abroad but he returned without doing so due to claims government wanted to impose medics on him.

The #RevolutionNow protests called by politician and journalist Omoyele Sowore was dispersed by police in the commercial capital Lagos. Sowore was subsequently arrested and detained despite court orders for bail.

A protest against his continued detention was also dispersed. He was released late December along with former National Security Chief Sambo Dasuki accused of embezzling funds meant to equip soldiers in Boko Haram combat.

In Ethiopia, the protests were over insecurity with the most prominent being the issues surrounding former ally of Prime Minister Abiy Ahmed, Jawar Mohammed. The activist claimed his state-given security was being compromised.

Which announcement on social media triggered protests that led to deaths across especially Oromia regional state. Protesters burnt book authored by Abiy and vowed allegiance to Jawar. Arrests have been made and prosecution is expected.

When a zone in the southern region began a push for statehood, the federal government did not respond till activists attempted a unilateral declaration of statehood in Sidama zone. federal forces were deployed and the incidents thereof led to deaths.

Across especially Oromia and Amhara regions, protests erupted across varsities with reports and analysts reading ethnic undertones. Government deployed federal forces to secure campuses with the threat that they could be shut down if need be.

Earlier in the year, there were protests across Oromia when the Addis Ababa city administration set out to give condominium apartments to people. PM ABiy initiated a committee to look into the matter.

The religious protests returned in the form of people marching in cities especially in Oromia and Amhara regions against attacks on religious facilities in the country – one of Africa’s most religious.

In Zimbabwe, the government set out to dismiss all planned protests which were largely economic or political in nature.

Police were deployed to thwart protests in some instances whiles in other cases they unleashed violence on people and arrested a number of activists.

Gambia – telling president to live by his promise

An unconstitutional promise to serve three instead of five years as per law was the reason why a section of Gambians marched demanding the president to call elections.

But President Barrow who became president as a coalition candidate has stressed that he has a five-year mandate. The coalition he led to power has fallen apart and he is supposed to run in the next polls with a new party according to experts.

Post election crisis has rocked Malawi amid a rolling court challenge of the reelection of Peter Arthur Mutharika as president of the southern African country.

The army was at a point deployed when the police could no longer handle the spreading protests. Deaths were reported and a shutdown of borders was narrowly averted by the authorities. The heat of the protests have died down but tensions exist as the court hearing is still underway.

Over in the Democratic Republic of Congo, DRC, the stand out protest was one demanding that the United Nations mission in the country, MONUSCO, sits up or shifts out.

The protests in the troubled east was in the wake of rebel incursions that continued to claimed scores of lives with an Ebola outbreak worsening matters.

A UN post was burnt down in the ensuing chaos. Over in Kinshasa, activists also marched on other issues of democratic demands and even against telecom operators deemed to be fleecing customers.

In Uganda, a major march was the anti-corruption rally that saw government and opposition organizing the walk on the same day.

Incidentally whiles the government’s version went ahead without a hitch, the parallel (counter) march was thwarted by police who insisted that it was not sanctioned and could not take place.

South Africa saw African nationals protesting against a surge in xenophobic violence in the country. Pretoria was forced to send a delegation across Africa to assure governments of relations.

In a number of African countries, protests and boycott of South African businesses were announced.