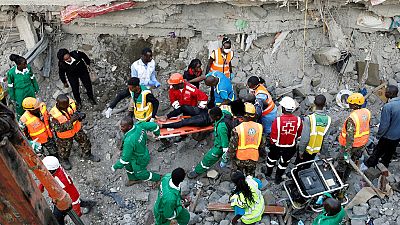 Kenyan rescuers digging through the rubble of a six-story building found two survivors alive Sunday, two days after it collapsed in Nairobi, as the death toll rose to 10.

When the survivors of Friday’s building collapse were found Sunday morning, a crowd of onlookers burst into cheers and claps.

A military member at the scene told The Associated Press they had been communicating with people believed to have been trapped in pockets of debris. He said some were screaming for help but the sounds of their voices had died down as time wore on. He insisted on anonymity because he was not authorized to speak with the media.

Given we have rescued two people two days after the incident, we hope to find more survivors. Remember there is more than 20 people missing.

Nairobi Police Chief Philip Ndolo said four bodies were recovered from the scene Sunday including that of a child, while a fifth person died in a hospital. According to authorities, that brings the overall toll to 10 dead, 30 injured and 20 missing.

Ndolo said the rescue of a man and a woman had invigorated emergency workers with hopes of finding other survivors. He said the two were in stable condition in a hospital.

“Given we have rescued two people two days after the incident, we hope to find more survivors. Remember there is more than 20 people missing,” he said.

He said the heavy rains that Kenya was experiencing, more than 300% above normal, were slowing the rescue operation. It was not immediately clear what caused the building, which the Red Cross said housed 22 families, to collapse.

But building collapses are common in Nairobi, where housing is in high demand and unscrupulous developers often bypass regulations.

On Saturday, one person died and others were injured when the balcony of single-story building in Chuka in central Kenya collapsed.

In September, a school collapsed in Nairobi, killing at least seven primary students.

After eight buildings collapsed and killed 15 people in Kenya in 2015, President Uhuru Kenyatta ordered an audit of all the country’s buildings to see if they were up to code. The National Construction Authority found that 58% of the buildings in Nairobi were unfit for habitation.