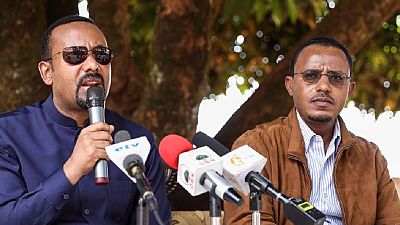 Ethiopia’s Defense Minister, Lemma Megerssa, has voiced opposition to Prime Minister Abiy Ahmed’s much touted philosophy of “medemer” whiles adding that he opposed the recent merger of the ruling party.

Megerssa is an Oromo, same ethnic group as PM Abiy. He stepped down as president of the Oromia regional state to allow Abiy to take his place and assume the position of Prime Minister in April 2018.

His opposition to Abiy’s disbandment of the four-member Ethiopian Peoples Revolutionary Democratic Front, EPRDF, and subsequent merger into a national party (Prosperity Party) has largely been speculated on social media months back.

His public views on the development was contained in an interview with the Voice Of America’s Afaan Oromo service. He belongs to the Oromo Democratic Party, ODP, the ruling party in Oromia.

“Generally right from the start, I had informed the executive committee and all of them know in details that it was not something I agreed to.

“Because I believe the merger of this party is wrong and even if it was right it is not the time for it, I have made myself not to be a part to it.

“The reason I said it is wrong is, number one, the ODP leaders have promised to answer some of the big questions the Oromo people have entrusted us with. Our people gave us these question as leaders of the ODP and not to this nationally formed party.

“Doing this without answering these questions is wrong and it’s failing to deliver on the promises we made. So we have to first answer on the challenges they gave us.”

Megerssa becomes the first insider in the ODP to openly voice opposition to Abiy’s plans. The PM is facing stiff challenge from a key member of the EPRDF, the Tigray Peoples Liberation Front, TPLF, who did not take part in the perger processes.

As things stand now, the EPRDF has been disbanded with the Prosperity Party currently having the ODP and the Amhara Democratic Party, ADP, having fully signed up.

The fourth EPRDF member is the Southern Ethiopia Peoples Democratic Movement, they have yet to conclude the process of joining the new party. Meanwhile, five other allied parties of the coalition are expected to join anytime soon.

Ethiopia – Afirca’s second most populous nation – goes to the polls next year in crucial vote. The process is proceeding despite security concerns. It is seen as a major test to PM Abiy who has opened Ethiopia’s political and democratic space since April 2018.