Kenya, Somalia to normalize relations after leaders meet in Nairobi 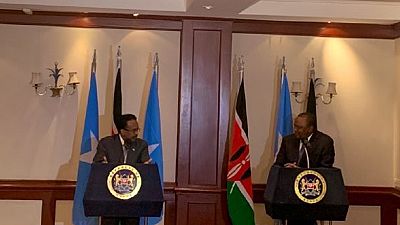 Despite a raging maritime boundary disagreement, leaders of Kenya and Somalia on Thursday agreed to normalize relations at a meeting in Nairobi.

Kenya’s Uhuru Kenyatta and his Somali counterpart Mohamed Abdullahi Farmaajo reaffirmed the invaluable relations between the two neighbours during a joint press conference after a closed-door meeting.

The Somali leader was part of world leaders who were in Kenya for the just-ended International Conference on Population and Development. This years’ was the 25th edition.

Kenya’s Foreign Affairs chief, Monica Juma wrote on Twitter: “The two principals agreed to bring normality to our bilateral relations and do everything to ensure peaceful relations including obtaining visas on arrival to encourage free movement of our people.”

The Somali leader also expressed gratitude to Kenya for its role in AMISOM, the African Union peacekeeping mission fighting insurgent group, Al-Shabaab and its role in sheltering Somali refugees fleeing conflict back home.

On the issue of the maritime boundary, Farmaajo said he had confidence that the International Court of justice, ICJ, seized with the matter will deliver a mutually acceptable resolution when it rules on the matter in the months ahead.

Remarks by President Mohamed Abdullahi Farmajo on what he has agreed and discussed with President Uhuru Kenya. In particular, President Farmajo assures President Kenyatta that the “ICJ issue would not affect our bilateral relationship”. pic.twitter.com/EdJACJXNbj

Remarks by President Uhuru Kenya on what he has agreed with President Mohamed Abdullahi Farmajo pic.twitter.com/irWhmLgX40