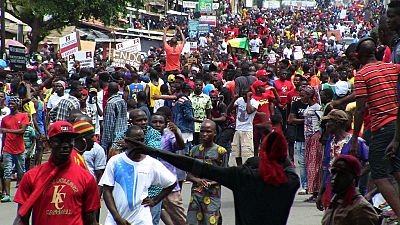 Guinea President Alpha Conde announced on Monday that he was replacing his security minister following deadly protests against suspected efforts by Conde to extend his mandate.

Conde, 81, is due to step down next year when his second and final five-year term expires, but he has refused to rule out running again and asked his government in September to look into drafting a new constitution.

Conde’s opponents fear a new constitution could be used as a reset button on his presidency, allowing Conde to run again like other African leaders who have amended or changed constitutions in recent years to stay in power.

Protests in Conakry, the capital, and the bauxite-mining north against such a move have resulted in at least 13 deaths over the past month.

The presidential statement read on national television on Monday evening did not provide a reason for the sacking of Security Minister Alpha Ibrahima Keira, but a senior government official told Reuters it was related to Keira’s “difficulty managing the socio-political crisis.”

Government spokesman Damantang Albert Camara will replace Keira as security minister. Conde also announced that he was replacing his health and justice ministers.

The government has said it would investigate the deaths during the protests, which opposition leaders and residents said were caused by security forces’ opening fire on demonstrators.

Conde’s first election victory in 2010 raised hopes for democratic progress in Guinea after decades of authoritarian rule. But his critics accuse him of cracking down on dissent and violently repressing protests – charges he denies.

A dozen opposition and civil society leaders were sentenced to prison last month for their role in organising the protests.