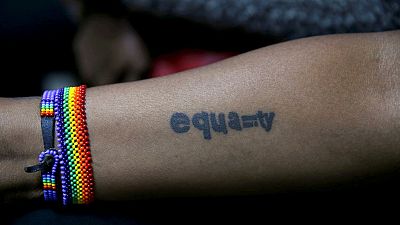 Barely weeks after authorities in Uganda dispelled rumours that the country was to impose the death penalty for gay sex, police have detained over a dozen men on suspicion of engaging in the illegal act.

Ugandan police have detained 16 men on suspicion of homosexuality and human trafficking, a rights group said Thursday, as activists fear an increase in targeted attacks against LGBT people.

The arrests took place in a neighborhood just outside the capital, Kampala, on Monday as the men were being hosted by another rights group, said Diane Bakuraira of Sexual Minorities Uganda, the country’s most prominent LGBT rights group.

A police officer confirmed the arrests, saying the men were detained following a “complaint from the public.” He spoke on condition of anonymity because he was not authorized to speak to reporters.

Activists say attacks against LGBT people are increasing amid efforts by Uganda’s ethics minister, Simon Lokodo, to introduce a bill that would punish gay sex with death. Uganda’s penal code currently punishes sex acts “against the order of nature” with up to life in prison.

Lokodo this month said lawmakers were being mobilized to show strong support for an anti-gay bill when it is introduced in the national assembly. The bill would punish activities including the “exhibition” of homosexuality, he said.

The government spokesman denies such a plan exists.

Lokodo has long called for the introduction of tough new legislation after a panel of judges nullified an anti-gay law enacted by President Yoweri Museveni in 2014 amid international condemnation.

That law, invalidated because it had been passed by lawmakers during a session that lacked a quorum, prescribed lengthy jail terms for those convicted of “attempted homosexuality” and “promotion of homosexuality.”

The original version of that bill, first introduced in 2009, included the death penalty for what it called aggravated acts of homosexuality.

Health experts say a new bill targeting homosexuals would harm efforts against the spread of HIV in the East African country.

“Criminalizing LGBT people and other key populations is utterly incompatible with the mandates of an effective HIV response,” the International AIDS Society said in a statement on Wednesday. “In 2018, men who have sex with men, people who inject drugs, sex workers and transgender people, together with their partners, accounted for a majority of new HIV infections, underscoring the need for governments to work with, not against, these communities who are most vulnerable to HIV.”

Homosexuals face discrimination in many parts of sub-Saharan Africa, where homosexuality is often seen as imported from the West.

Four members of Uganda’s LGBT community have been killed in attacks over the last three months, according to Sexual Minorities Uganda.