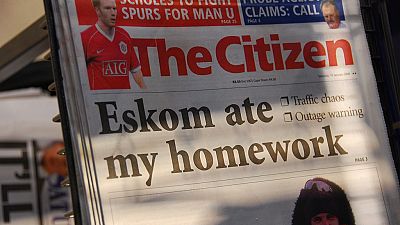 South Africans are bracing themselves for yet another bout of power cuts after the power utility company Eskom on Thursday announced a second day of load-shedding citing a number of generating units still out of service.

We make money out of this business through electricity; if it’s not there then we are going down.

“Contingency measures have been put in place to manually feed coal to Medupi (power plant) whilst we look into a permanent solution to the coal conveyor belt failure at the station,” Eskom said.

“We have started receiving additional diesel supplies from the major oil service providers and as such we are comfortable that we can build the necessary diesel and water reserves to acceptable levels over the weekend.”

Late on Wednesday it said some generating units have already returned to service and it expects more units to return to service over the next few days.

South Africa’s rand currency fell as much as 1% against the dollar on Wednesday after Eskom announced the cuts.

“It’s almost year-end and this is when we make money,” said Bridgette Moyo, 29, a hair stylist. “We make money out of this business through electricity; if it’s not there then we are going down.”

Eric Gyimah, 26, a media consultant, said the power cuts were a “huge inconvenience”.

Pressure on the economy

The announcement put more pressure on the country’s weak economy ahead of a review by Moody’s, the last of the big three credit rating agencies to have an investment grade rating on South Africa.

Eskom produces more than 90% of South Africa’s electricity but has been hobbled by technical faults at its fleet of mainly coal-fired power stations.

It is also grappling with a debt pile which stood at around 440 billion rand ($31 billion) as of March.

The government is also expected to name a new chief executive for Eskom after the previous CEO stepped down in July and publish a paper detailing further steps to reform the utility.

Ramaphosa has pledged 59 billion rand of support for Eskom over the next two years, on top of 230 billion rand in bailouts spread over the next 10 years. Officials say its operational losses mean Eskom will also have to take other measures to make it financially sustainable.