Ethiopian Airlines wins big in its 'most challenging year' 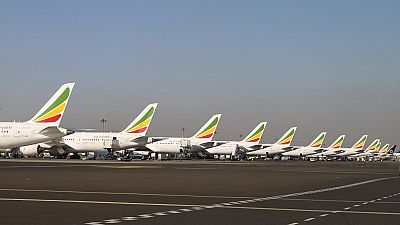 Ethiopian Airlines says this was ‘the most challenging year’ even as it posted impressive passenger and revenue figures over a difficult period for the aviation industry.

“As you know the 2018-2019 was a very challenging year. In fact we believe that it was the toughest year in our history,” said the airline’s Chief Executive Officer, Tewolde Gebremariam.

Tewolde said the March 10 crash of a scheduled flight from Ethiopia to Kenya, which claimed 157 lives was the biggest challenged by the airline.

In fact we believe that it was the toughest year in our history.

“We lost our dear colleagues and valued customers and we still remember them in our daily lives. Managing the accident crisis was a challenge,” he said.

The crash raised questions on Boeing’s B737-MAX jetliners that were consequently grounded by Ethiopian Airlines, China and eventually the entire aviation world.

Ethiopia’s own commitment to safety has come under scrutiny, with a report from a whistleblower accusing the airline of compromising safety in its quest for growth.

“The brutal fact shall be exposed … Ethiopian Airlines is pursuing the vision of expansion, growth and profitability by compromising safety,” the airline’s former chief engineer, Yonas Yeshanew said.

Yeshanew submitted his scathing report last month to the U.S. Federal Aviation Administration and other international air safety agencies. In this report, he also alleges that the airline went into the maintenance records of the ill-fated Boeing 737 Max a day after it crashed.

The airline has dismissed Yeshanew’s allegations as desperate attempts by a disgruntled employee who is taking advantage of circumstances to facilitate his quest for asylum in the United States.

‘‘He is a disgruntled ex-employee who fabricated a false story about Ethiopian Airlines, partly to revenge for his demotion while working in Ethiopian, and partly to probably develop a case to secure asylum in the USA,” the airline said in an email to AP.

“We would like to confirm once more that all his allegations are false and baseless.”

Ethiopian is Africa’s biggest airline, and one of a few that have gone through rigorous safety tests to be granted access into European and North American airspaces.

Ethiopian Airlines says its currently facing a shortage of aircrafts that can be attributed to the unfortunate events of the past year. At the time of the crash, the airline was operating 5 MAX planes with 25 more on its order book. One was lost in the accident, while the other four have since been grounded.

“We also have issues with the 787 aircraft powered by Rolls Royce engines. Although Rolls Royce is compensating us we are facing shortage of aircraft,” Tewolde said

The CEO also explained that the airline was struggling to repatriate its funds from some African countries.

“We have blocked funds in some African countries and we are losing money due to the currency fluctuations. We had discussions with the respective governments but we did not find any solution so far,” he said.

Some of these countries are Angola, Zimbabwe, the Republic of Congo, Central African Republic, Sudan and Eritrea.

The record 12.1 million passengers that flew with Ethiopian during the year to June, helped the airline offset an increase in fuel costs of about 25 percent.

Ethiopian Airlines still managed to post impressive results in its ‘most challenging year’, including a big rise in operating revenue and a surge in passenger numbers which helped to offset the impact of higher fuel costs.

In January, a new terminal was launched at Ethiopia’s Bole International Airport. With a a capacity of 22 million passengers, it became Africa’s biggest aviation hub.

Skylight Hotel, a subsidiary of Ethiopian Airlines was also commissioned.

Addis Ababa had also last year overtaken Dubai as the leading gateway to Africa, according to travel intelligence agency ForwardKeys.

The airline’s management, determined to grow even further, has presented a 15-year growth strategy that dubbed Vision 2035 to its Board.

Vision 2035 would make Ethiopian a $25 billion company with more than 200 aircraft by 2035. Ethiopian currently operates a young fleet of 121 flying to 125 destinations.

Tewolde warned that an economic slowdown due to the U.S.-China trade war could affect demand this year.

“The U.S. and China are our top markets and we are now seeing an impact on cargo services. The global cargo service has already showed a 7% decline and we expect the same trend… This is very concerning,” he told the television station on Tuesday.

Tewolde told a local television station on Tuesday that the airline plans to buy 17 new passenger aircraft and launch flights to 11 new destinations.

One of Ethiopian’s expansion strategies is by helping other African countries establish and manage their own carriers.

Last week, it was reported that the airline was interested in supporting the struggling South African Airways which has not made a profit since 2011.

If South Africa asked Ethiopian to buy a stake, “we would consider it,” Tewolde said, adding that they are also investing in new carriers planned for Ghana and Zambia.

“We have recently signed a shareholders agreement with the Ghanaian government,” Tewolde said. “Hopefully it will be up and running in the next six months.”

With such ambitious plans, the company seems determined to bounce back from its ‘most challenging year’ with even more impressive results.