The remains of Mugabe to be moved to his village, Kutama 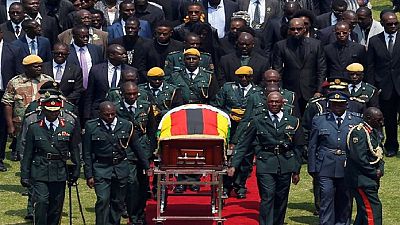 The remains of former Zimbabwean President, Robert Mugabe will be transported on Monday to his village of Kutama, northwest of the capital Harare, to allow his family to pay him a final tribute, his family announced on Sunday.

The country’s former president died last week at the age of 95 in a luxurious Singapore hospital where he had been receiving treatment for years.

His successor Emmerson Mnangagwa and some African heads of state paid tributes to his memory on Saturday at a two-thirds empty Harare stadium at a state funeral. He is to be buried within a month at the “Field of Heroes”, a monument in the capital, once a mausoleum has been built in his honour.

Until then, his remains are to be transported on Monday to Kutama, his native village where he owned a property.
His coffin will be displayed for the people of the village. He will spend the night there,” a family spokesman, Leo Mugabe, said.

The local tribute was initially scheduled for Sunday but, as traditional leader Raphael Zvikaramba disclosed, the family “needed to rest”.

The details of Robert Mugabe’s funeral have been the subject of intense tensions between his family and Mnangagwa’s government, whose relations have been bad since the army coup that caused the former president’s fall in 2017.

Having led Zimbabwe for 37 years, Robert Mugabe left behind a country traumatized by repression and ruined by 20 years of economic crisis.