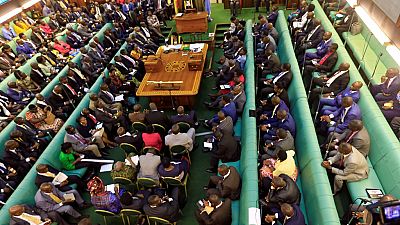 Legislators in Ugandan have been urged to be at their best behaviour during the forthcoming Commonwealth Parliamentary Conference(CPC).

Local media reported that the speaker of parliament, Rebecca Kadaga tipped her Members of Parliament (MPs) to observe etiquette, respect the official dress code and warned them against indulging with delegates.

“When you ‘load’ your plates, don’t overload, don’t mix dessert and meat, pineapple and matooke, and the soup,” Kadaga said, adding: “while eating, even when you are hungry, don’t rush.”

So, don’t take risks, don’t get involved, a man may come from Jamaica and you won’t see him again, and for the men, a woman from down in the Pacific, you cannot find her again.

Kadaga added that several members of the Ugandan parliament had been impregnated by Tanzanian delegates a few years ago when Uganda held a summit with Tanzania.

“So, don’t take risks, don’t get involved, a man may come from Jamaica and you won’t see him again, and for the men, a woman from down in the Pacific, you cannot find her again. We must be very careful in whatever we do,” Kadaga said.

The Speaker also implored the MPs and the staff not to drink excessively.

“Your drinking should be done in your homes and avoid the smell of alcohol in the morning,” she said.

The fact that this has to be even a conversation amongst MPs leaves us with so many questions….

Sounds like school children being warned not to misbehave…. Ridiculous!!!! I would be offended if i were Jamaican

When does one rest from patriarchal princessing?
Riyale! Why the need to control how women choose to live their lives, even in parliament!!
Kadaga needs to find a new hobby! https://t.co/XZkYBP7p7P

The speaker also used the occasion to emphasise the significance of hosting the global event.

“The people who are coming will be able to know more about our country and speak about us, so whatever experience they get from here, they will use it for or against us,” she said.

The CPC is slated for September 22 to 29 at the Commonwealth Resort Hotel in Munyonyo, Kampala, with more than 1,000 delegates expected in the country.