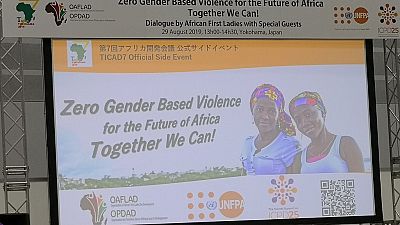 African First Ladies are meeting on the sidelines of the ongoing Tokyo International Conference on African Development, TICAD, to up efforts aimed at combating gender-based violence, GBV.

Mialy Rajoelina; First Lady of Madagascar said a sure way to eradicate gender based violence was by uniting to confront the scourge. Natalia Kanem, UNFPA boss said her outfit was proud to partner with OAFLAD.

Madagascar president Andry Rajoelina and Burkina Faso’s Roch Kabore who joined the event emphasized their total support for the initiative.

The meeting in Yokohama, Japan, was classed a high-level side event at the 7th TICAD underway. The meeting was dubbed “Zero Gender Based Violence for African Future.”

It is an event co-organized by: The Organisation of African First Ladies for Development, OAFLAD; the United Nations Population Fund, UNFPA and in collaboration with the African Union.

OAFLAD’s main engagements are centered in the area of advocating for prevention & treatment of HIV / AIDS. First Ladies have often held side events when their spouses meet at major summits.

Their last summit took place in July this year in Nigeri. OAFLAD has a two-year rotating presidency. The chairwoman is Congo’s Antoinette Sassou Nguesso with her vice as Auxillia Mnangagwa of Zimbabwe.

Some of their key meetings over the last few years have been at Ordinary Summits of the AU, yearly at the United Nations General Assembly and also at the Africa – China summit, FOCAC, in Beijing 2018.

What a NEPAD report said about GBV

While gender-based violence (GBV) is not a problem unique to Africa, there is little doubt that the extent of the problem persists more severely on the continent than elsewhere in the world.

The World Health Organization (WHO) reports that, in 2013, 35% of women worldwide had experienced either physical or sexual violence in their lifetimes. In contrast, 45.6% of women 15 years and older in Africa have experienced the same.

This high incidence of GBV in Africa can be correlated to low levels of education, exposure to violence elsewhere, patriarchal systems, attitudes accepting of violence and gender inequality, and low access to information.

In societies where justice is seldom achieved, knowledge of women’s rights is limited, and exposure to violence is consistent the task of reducing GBV remains of paramount importance.