Scientists fertilize eggs of endangered Rhino only found in Kenya 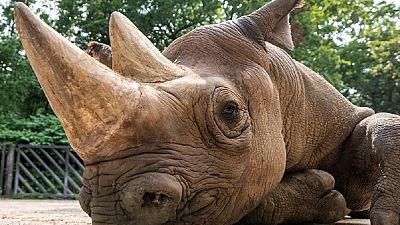 Najin and Fatu – seen here at the Ol Pejeta Conservancy in Nanyuki, Kenya along with a Southern White rhino – are the last two female Northern White rhinos in the world. There are no longer any males. Their species has been killed by poaching fuelled by the demand for rhino horn.

The last male, a 45-year-year-old named Sudan, gained fame in 2017 with his listing as “The Most Eligible Bachelor in the World” on the Tinder dating app in a fundraising effort. He died in March 2018 – euthanised after age-related complications.

The matter of the eggs

Vets successfully harvested eggs from Najin and Fatu at the conservancy last week Thursday (22nd August 2019), raising hopes scientists may save the species from extinction.

Now the international team working on the project in Italy says it has successfully fertilized the eggs with frozen semen extracted from Sudan and one other male before they died. It’s an experimental procedure which has taken a long time to develop and perfect.

I will just want to call upon us to realise why it is important to protect these animals before we come to as close as we are to the near extinction.

“The procedure we did is the only hope to rescue the northern white rhino because all other procedures we developed before like artificial insemination doesn’t work in this species. So the only chance is harvest eggs, fertilise them in vitro, produce and embryo, and bring it back into the female,” says Dr. Frank Goeritz, Head Veterinarian at the Leibniz Institute for Zoo and Wildlife Research

The announcement Monday (26th August 2019) was the result of work by European zoos who have been developing procedures for the extraction of the eggs for implanting into a surrogate white female rhino.

Neither Najin and Fatu is able to carry a calf, one has lesions in her uterus and the other has weak legs which would endanger any pregnancy.

Their eggs have now been harvested and fertilised, but it will be about 9 days before it’s known whether the eggs have become embryos.

“When we get 2 embryos out of these 10 eggs, it would be a big breakthrough. And then we have to transfer the embryo, which will be preserved in liquid nitrogen, for later embryo transfer,” says Goeritz.

“When we have shown in the Southern White rhino that the embryo transfer is working well, then we will use this embryos and come back here to Kenya and we find surrogate mothers in the southern white rhinos here to do an embryo transfer and hopefully 16 months later a live calf will be born here on the ground.”

Now they are working on how to implant the embryos into a surrogate mother to bring them to term, and once they’ve mastered that, they can create purebred Northern White rhino embryos that would be carried by a southern white.

The ultimate goal is to create a herd of at least five animals that could be returned to their natural habit in Africa. That could take decades.

“It is very obvious that the concept of evolution did not fail on this species. It’s human beings impact which brought this species to extinction, and therefore it is our responsibility as human beings to counteract this. And third I think as a scientists we are generating so many informations, so many knowledge which will help in the future other species which are endangered right now,” says Goeritz.

Decades of poaching have all but wiped out the Northern White rhino’s numbers. Southern White rhinos and the Black rhino are also prey for poachers, the former being listed as Near Threatened on the IUCN (International Union for Conservation of Nature) Red List of Threatened Species, with the latter Critically Endangered.

“I will just want to call upon us to realise why it is important to protect these animals before we come to as close as we are to the near extinction of these two rhinos, and I hope we can see it before it comes to such a close because these are just the red light warnings of what is happening to many more species some which we can’t see. These are just big animals that we can’t avoid to see, but extinction happens to so many other species that suffer without our notice, so it’s a call to action for us to continue protecting the animals that we have before it’s too late,” says Mwenda.

The Northern White rhino is on the verge of extinction, but this latest turn in its story raises further hopes that the species will survive.

The efforts to save the Northern White are being led by the Leibniz Institute for Zoo and Wildlife Research in Berlin, Germany, Avantea biotechnology research and animal reproduction lab in Cremona, Italy, Dvur Kralove Zoo in the Czech Republic, the Ol Pejeta Conservancy and the Kenya Wildlife Service.