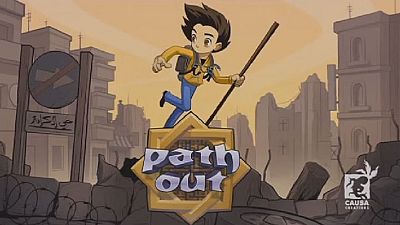 A video game that helps tell the story of a Syrian refugee’s perilous journey of escape. Abdullah Karam is the main character of this video game called ‘‘Path Out’‘. The game takes gamers through his escape from the worn-torn country in 2014.

“I’ve faced mines, I faced soldiers. We got shot at one point, we ran away. But you see the decision you make, it’s not like you sit on the couch, you’re there, you’re in it. It’s like in a video game, your reflex is like in the video game. You’re like; ‘Okay well, I have to run now. This is the level where I run’‘, he said.

Karam now lives in Austria after harrowing experiences through Turkey. He arrived in Austria in 2015 and met George Hobmeier who runs a small independent video game studio, Causa Creations..

I really personally hope that people will change their mind about refugees and how they get approached.

“We wanted to do something intentionally cute that displays something that is not cute at all. In the beginning, this is not so obvious, but later on in the levels where you meet ISIS soldiers and they are these tiny 32 by 32-pixel beings that kind of bumble around the screen, it becomes like; ‘Oh, this is really awful.’ But it’s cute, which makes it even more awful. So, that was that was the aesthetic reason behind it. And the other one was actually that we did want the game to be very accessible”, Hobmeier said.

So what informed the choice of a video game to draw attention on the plight of refugees?

“Games actually are a format where people are willing to spend sometimes a ridiculous amount of time. So for them, I’m just going to play this one hour a game, it’s nothing, but it’s still compared to other like a short newspaper article about migration, it’s a lot of information on a subject.Packaged in a funny game’‘, Hobmeier added.

Karam now works in marketing and hopes the video game will serve a noble cause.

‘‘Path Out’‘ is currently available on video game distribution sites Steam and itch.io.

The creators say they hope to produce more detailed, bigger budget version of the game in the future.